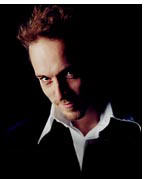 I almost missed taping the start of Derren's new series (Channel 4, Friday evenings). In reaching for the remote I moved the envelope containing my tickets for his live show and sent a small mountain of paperwork in an avalanche down the back of the desk.

Clearly I must have been quite excited about the show. Twice this evening I managed to walk into something and almost concuss myself, and shortly afterwards I proceeded to pour good deal of Coca Cola onto my carpet.

My excitement was not in vain; Derren did not disappoint in this, the first show of his new series. That said, the programmes making up this series are not in fact entirely new. The team have decided to reuse the best segments from Derren's previous three Channel Four specials. This was a wise choice. The Mind Control team appear to have realised that we'd rather see something entertaining twice, than have entirely fresh material but of a lesser standard. Mind Control has retained the classy touch.

The show started in a similar manner to the previous specials, with Derren introducing the audience to his 'methodology' with a briefly explained visual force of two geometric shapes in a specific arrangement. We won't want to be using that one again for a while then…

I can safely say this because I'm guessing this show will have had a goodly number of people sat in front of their TV sets (mostly muttering something about 'how the hell did he…') and at the office on Monday they'll all be asking you to choose two random shapes... umm… 'grey elephant'?

Until now, if Family Fortunes had surveyed a hundred people asking them to name a Channel Four mind reader - you'd not even have got a double parpy noise. You'd just have got a blank look. From now things look set to change. I seem to have seen trailers for this series more often than I've seen the inside of my own kitchen cupboards, and this is a good thing. The pre-show publicity must have worked; a colleague of mine I'm fairly convinced doesn't even have a TV rang me two minutes into the programme to make sure I had it on.

Once we've been charismatically talked into the mindset Derren wants us to use we get stuck straight into some direct mind reading.

This material was all new and devastatingly powerful. Initially Derren mind-read, using a variety of unseen, volunteer-chosen objects as the subject matter. We saw clearly in action his use of 'visible mind-reading' theory - give them something to look at and show them where the mind reading happens. This section alone was top-class material but then when Derren stepped aside and a visibly baffled bystander started to pluck thoughts from the victim it was hand-clappingly joyous to observe.

The standard was high throughout the show, with no noticeable dips in entertainment value or the strength of the mentalism. The segment with the advertising guys and the 'subliminal placement' of ideas was brilliant to watch, and not just for its ingenuity but also for the way it made me snigger like a teenager upon hearing that his new teacher has a mildly amusing surname.

So then, a promising start; and I predict that the likelihood of this standard continuing throughout the series is more than that of someone, being asked to choose two random geometric shapes in a particular configuration, coming up with a circle in a triangle.

Mr Brown is assuredly set to take the world by storm. Goody.