Quotes from participants in the show:

"I was really believing it when it was happening"

"I don't think it's quite human you know" 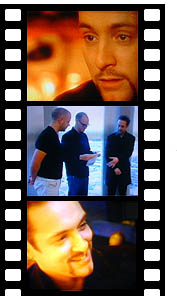 Last year Derren Brown made a huge impact on the magic scene in the UK with his ground breaking Derren Brown: Mind Control television special for channel 4. Eight months on MC2 goes out, and does it again. Sequels are never easy, your audience has pre conceived ideas and expectations, and you've already 'been there'... but the opposite is also true, you don't have to prove yourself, the format is established, and you can develop themes that were only touched on before.

This time around we saw more of Derren's own personality; his performance was perhaps more relaxed yet had greater authority, and that 'Derren charm' was evident throughout. Once again the opening minutes of the programme were used wisely, to clearly establish both the format of the show, Derren, and what he is all about. Causing travellers on the underground to momentarily forget their destinations was very strong, had spontaneity, and conveyed the right mood for the show that followed... it sparked the imagination... "did he just do that?" It intrigued. Show me more...

Next, using an artists sketch pad, Derren's predictions were filmed 'live' as he was making them. Viewers saw him commit words to paper for them to be confirmed just moments later by a volunteer, using the pad merely as a means to get his thoughts down. Again powerful stuff.. real mind reading (that also had a twist at the end). In all there were perhaps 15 different sequences in the programme, without a dud amongst them.

These shows are a breath of fresh air after years of magic stagnation TV wise in the UK. Derren and his team have clearly put their thinking caps on and pressed down the poppers, and in the process are pushing the medium in new directions. The routines are crafted, they take the audience somewhere, they make them think. The closing sequence with an advertising agency was excellent and really showed what Mind Control is all about (and where it is heading) - the fact that some magicians went for the explanation at the end tells you something as well!