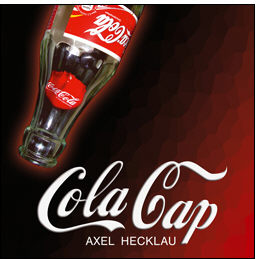 The visual penetration of a bottle cap into a bottle.

"A factory sealed glass Coca-Cola bottle is opened (including the real hiss) and the bottle cap is examined by a spectator. The contents is poured out. Seconds later the bottle cap penetrates the solid glass bottle! The spectator can immediately examine everything. He will notice that the cap is undamaged in the bottle and there is no non-violent possibility of freeing the bottle cap again.


Other routines end here. For ColaCap this is the starting point.

Shaken briefly the cap is free again. After an exact announcement what you are about to do, on the count of three, the audience will see the cap visually penetrate the solid glass bottom.


Without misdirection, without surprises, without difficulties.


Both bottle and cap have no signs of preparation and can be given to the spectator right after the performance!"

That's the effect, and I'd recommend watching the demonstration video now: www.axelhecklau.com

ColaCap has a number of things going for it that results in the effect being very strong for the layman. First, of course, is the fact that a bottle of Coke is an every day object, one that everyone 'knows' already... caps come off bottles, they can't go in them. Then once the cap has penetrated the bottle spectators are presented with a sort of 'ship in a bottle' type quandary - it should not be possible!

Here's a trick where the actual method is as strong as the effect - and the method is simply brilliant. All the gimmicks (there's more than one, and you won't believe some of the gear included with this effect) have been meticulously designed and perform their job perfectly. This is a trick that will last forever. Together with a number of 'things' that make it all work you are supplied with an A4 instruction book and a beautifully produced DVD that includes credits, hints and tips, additional moves and a few funny bits.

There was only one move in the whole routine that didn't do it for me, and that was where the performer's hand went in one direction as the cap visually went in another, thus dividing the audience's attention and distracting from the moment of magic... but that was only one move out of the many variations offered, and it doesn't have to be used, so wasn't a problem.

Watching the DVD it also occurred to me how easy it would be to let this routine develop into other related effects using a bottle, bottle caps, a bottle opener, serviette and so on and although the Coca-Cola bottle is iconic, other bottles can be used if preferred.

Technically this is easy to perform too for any competent magician. In the hands of the right performer this has all the makings of true reputation-making piece of magic, oh, and you can sign the bottle containing the cap and let them keep it as well (together with your business card I hope).

Superb. Loved this one; and it's excellent value too.