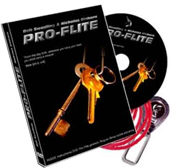 The Flying Ring is a classic effect where a spectator’s finger ring apparently transposes instantly from one place to another. Al Koran is credited with devising the original idea of the ring reappearing, hanging among the keys in the performer’s key case.

Pro-Flite is the latest variant of the Flying Ring effect from two very well respected magic inventors, Bob Swadling and Nicholas Einhorn. They have been refining Pro-Flite for about two years and have developed something new by understanding the ideas and creations of some notable magical thinkers of the past.

With Pro-Flite there is no key case or wallet as there is with the Koran, Hooper, Kaps and Bloom versions. The Pro-Flight gimmick is a simple keyring with a leather fob, like those used for Mason’s Magnifique and Dusheck’s Ringer and similar to the Morelli Ring Mystery originally released by Collector’s Workshop. The keyring itself is rectangular and the prop looks very similar to Dusheck’s version which, Einhorn says inspired him to create Pro-Flite. However, the method and construction are very different to Ringer and the Morelli Ring. With Pro-Flite, Einhorn has adopted the elegant simplicity of Kaps’ approach.

The Pro-Flight package includes the special keyring with leather fob, a lace for a ring on string sequence and a very comprehensive instructional DVD. Nicholas Einhorn is a very good teacher and the explanations on the DVD are extremely clear. They include every detail on the one-time set up, the simple handling moves necessary and three different presentations: a lightning fast borrowed ring to keyring; borrowed ring to keyring in the spectator’s hands; and a more leisurely routine where the main effect is followed by a very well constructed five phase ring & string sequence before the ring is discovered back on the keyring a second time. As a further bonus, Nicholas explains (with full credit and permission) the second phase of the ring & cord routine from The Master Routines Series by Mark Leveridge.

Pro-Flite is a secure keyring that you can use for your own keys so you’ll be ready to present the effect at a moment’s notice. You can perform Pro-Flite with large or small rings and when you put the keyring back in your pocket, you’re ready to perform the effect again immediately. These are important considerations for the professional performer. Unlike other keyring (as opposed to key case) versions, the borrowed ring really is securely on the keyring, and not just on a separate clip attached to the keyring, at the conclusion of the effect.

One of the nicest features of Pro-Flite is that you can display the keyring very cleanly to show that it only has keys on it before making the spectator’s ring appear alongside those keys instantly.

The DVD also contains a wealth of other tips and full credits are given for all moves and sleights, together with full references so you can locate and research the original publications. On the DVD, Nicholas explains that he and Bob Swadling evolved the Pro-Flite gimmick through more than a dozen prototypes before releasing this product. Their attention to detail really shows. Your Pro-Flite gimmick will last for years. There is nothing to break or snap and the gimmick could be examined before and after the effect. In fact, I was sent the keyring to examine about a week before the DVD arrived and during that time I tried and failed to figure it out.

If you are considering adding an effect from the Flying Ring genre to your repertoire, then Pro-Flight is worth your serious consideration.