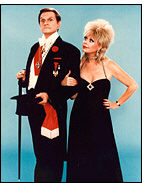 Over the decades organisers of the British Ring Convention have strived to include The Great Tomsoni & Co. in their programme. Regretfully it has not been possible to do so. Last year we had hoped it would happen but due to contractual commitments our hopes were dashed. However a pledge was made to come this year.

So at long last British Ring conventioneers will be able to enjoy the world famous act of The Great Tomsoni & Co. ‘Poland’s Greatest Magician’. Mark Tan in Variety, the USA’s showbiz newspaper quotes ‘their act is quite baffling as well as the best comedy team in show business’ while Jim Parker in the Las Vegas Revue Mirror says ‘Tomsoni is to magic what Victor Borge is to music….Simply hilarious!’. So in Southport we will relish the act of one of the funniest people in magic.

Not only The Great Tomsoni a.k.a. Johnny Thompson be performing in the final International Magic Show he will also be delivering ‘An Hour with Johnny Thompson’ filling the Jeffery Atkins Memorial Lecture spot. Something that is not generally known is that Johnny is in constant demand as a consultant and inventor by all the major names in the magic business. Miss this prestigious lecture and you will miss a memorable magical experience.

It will come, as a complete surprise to many to discover that a world acclaimed comedy magician has never appeared at one of our Conventions. This will be rectified this year when David Williamson presents ‘The David Williamson Experience’ when ninety minutes of mayhem and madness will ensue.

It was back in 1981 that David burst upon the magic scene when he took first place in the International Brotherhood of Magicians Sleight of Hand competition and in the same year becoming the first recipient of the prestigious Golden Cups Award for excellence in Close-up magic. He has also on two occasions been voted Sleight of Hand Magician of the Year by his peers at Hollywood’s renowned Magic Castle as well as twice being awarded both The Magic Castle Lecturer of the Year’ and ‘The Magic Castle Parlour Magician of the Year’. At the 2003 Den Haag F.I.S.M. Convention he was voted ‘Most Wanted Magician’.

His best selling book ‘Williamson’s Wonders’ has been translated into four languages and he has produced several instructional DVDs.

We are promised that David will be popping up all over the Convention so you will be seeing a lot of him. You will forever regret the opportunity of seeing and meeting this esteemed magical legend if you are not at Southport.

Joanie Spina, who describes herself as a performance coach, will give one of this year’s scheduled workshops. She is probably best known for choreographing several of David Copperfield's early television specials. During her eleven years with David she redressed the art of magic with flair of the calibre of Broadway and Hollywood productions. Her collaboration with one of the worlds most respected conjurers raised the statute of magic to new heights and ensured the validity of the art into the 21st century.

Latterly she launched Spina Creative Services launching numerous shows as well as individual performers in the pursuit of artistic perfection. Because of her calm approach both producers and performers enjoy working with Joanie. By nurturing and giving heaps of encouragement she makes performers comfortable to take chances. Her keen eye is able to troubleshoot and smooth out rough edges in existing productions. She has a superior artistic sensibility and a great feeling for timing and pacing. She is gifted with an ear for music and is able to research and select music that best suits the production.

Last year Conventioneers were inspired by Seth Hyken and Tim Conover and made their Tradeshow Workshops a highlight of the Convention. It is predicted Joanie’s workshop will this year do the same and become one of this year’s highlights. Her advice will be of benefit to every performer attending. No matter whether they perform on stage, in cabaret, in clubs, at dinners or for children. This is a lady who has worked and guided a number of the world’s magic stars!

Come, listen, absorb and implement her advice. It will be to your advantage and you will never regret it.

Children’s entertainers will not want to miss the performance and lecture of New York’s Alan Garber affectionately known as Magic Al.  For 25 years he has been the king of Long Island’s birthday circuit entertaining adults and children alike with his fine tuned balance of silliness and magic maintaining a performing schedule of three hundred to four hundred shows a year. Seventy-five percent of his shows are kid shows, the remainder being for families and adults. His trademark is in his dress. He wears tuxedo tails with flunky sneakers.

In 2004 he teamed up with a producer and a director and wrote a theatre show, which played in one of New York City’s many off Broadway theatres. For the first and only time since its successful run he will be doing the show on two occasions at the Southport Arts Centre Theatre. In the main magicians will make up the audience on both occasions with about 100 local children sitting in front for Al to work to. After a short break the children will leave and Al will present his lecture about the show to the magicians. Magic Al will also feature in Saturday afternoon’s Children’s Showtime at the Arts Centre theatre.

For Children’s entertainers this lecture and show should be a must.

The British Ring is proud to introduce to this country Canada’s premiere illusionists Murray Hatfield & Teresa at its Convention. From the moment they take the stage they thrill the audience with their award winning mix of magic, music, dance, comedy and stunning illusions.

Murray and Teresa incorporate a great deal of comedy in their show often with the help of a member of the audience. These volunteers become the true stars of the show as they assist with the magical chaos. A testimonial from the sponsors of the World Festival of Magic – Australia/New Zealand Tour reads ‘Murray Hatfield & Teresa carried the 15-week tour to new and resounding successes’.

If you have not already registered for this great extravaganza of magic do it today by contracting the registration Officer Neville Johnson on 01202 873234 remember you can download a registration form from this website and you can make payment by Paypal.

Register now! Southport 2007 is going to be the Magic Convention of the year!