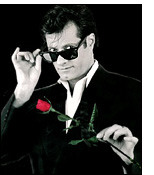 Right from the start at 12 Noon on Wednesday we have an excellent Opening Show featuring MC Kevin King, the Award winning Paul Dabek, the funny & original Gaetan Bloom (with a new Act) and the superb Canadian illusionists Murray Hatfield & Teresa.

This is followed by three world class Lecturers, Bill Malone, Rocco (photo) and Bob Sheets, and a Workshop from our own Michael Vincent. In the evening, Mel Harvey hosts the new look Shield Competition, and then it's the first of three 'Late Nite Magic' shows with a sensational line-up of talent on offer!

The highlights on Thursday include 'The Dave Williamson Experience', a 90 minute whirlwind session, followed by other notable Lectures from Paul Kieve (of Harry Potter fame), Joanie Spina (lead Dancer and /choreographer of 10 David Copperfield TV Specials), Boris Wild, and 'Magic Al's Lecture / Show (re-creating his unique Off Broadway Children's Show for the first time since 2004).

The 'Thursday Nite Show' will be a deliberately different style of show, with lots of original entertainers, and several new faces to an IBM Convention, including John Fealey, Rob Torres, Tim Gabrielson (just started his own daily afternoon show at the Mandalay Bay Hotel & Casino in Las Vegas), legendary ventriloquist Ray Alan with Lord Charles, and a surprise Act to close the Bill. You'll have to be there to find out who!

On Friday, the Jeff Atkins Memorial Lecture features probably the greatest 'all round' magician in the world today, the superb Johnny Thompson, assisted (?) by his vivacious wife Pam! Simply unmissable!

Then another legend ... Lennart Green lectures. Next up is the Eddie Dawes Show with a few surprises promised. The Late Gala is emceed by the Magic Circle Stage Magician of the Year, Romany, who will introduce the hilarious Bob Sheets, Tennis juggler Daniel Hochsteiner, and a very unique performer Dan Dunn.

An early start on Saturday sees a lecture from one of magic's most creative and talented performers Gaetan Bloom, followed by the International Close-up Gala featuring most of the greats mentioned earlier, and there's also a 'Celebrity Ask the Experts' with Johnny Thompson, Paul Kieve, Joanie Spina and Tim Gabrielson.

To round off the Convention on Sunday morning there's a final Star Lecture from Robert Baxt, and then the Stars of the Future Show.

It's just too good to miss! And there's still time to book.