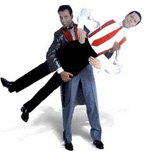 Here is a run down of who will be appearing in each of the daily stage shows, all to be performed in the Southport Theatre.

The Opening Show on Wednesday at noon will have Kevin King as MC and will include award winning Paul Dabek, the new act of the funny and original Gaetan Bloom and the superb Canadian Illusionists Murray Hatfield and Teresa.

The ‘Thursday Nite Show’ will be a deliberately different style of show with lots of original entertainers and several new faces to an IBM Convention including John Fealey, Rob Torres, Tim Gabielson, legendary ventriloquist Ray Alan with Lord Charles and a surprise Act to close the show. Only Executive Producer Paul Stone knows who it is and he’s not saying.  To find out who it is, you’ll have to be there!

Friday night’s ‘Late, Late Gala’ will be emceed by The Magic Circle Stage Magician of the Year, the effervescent and glamorous Romany (we are anxiously awaiting to see what she will be wearing) and she will be introducing the hilarious Bob Sheets, Tennis juggler Daniel Hochsteiner and a very unique performer Dan Dunn.

The International Stars of Magic Gala on Saturday evening crowns a day that has been full of spectacular magic.  It will be hosted by Robert Baxt and will star from Las Vegas The Great Tomsoni and Co, Vik and Fabrini (photo) direct from the Crazy Horse in Paris, where they have had a record breaking 17 year run, UK’s top TV magician Paul Zenon, the fantastic and hilarious Les Bubb, football juggler Erik Borgman, ‘Stringfever’ the sensational electric string quartet and Canada’s Premier Illusionists Murray Hatfield and Teresa.  Music is from the Ian Mac Band.

And don’t forget the two shows that have already been detailed, Eddie Dawes ‘Melange of Mystery’ on Friday afternoon and Children’s Showtime Saturday afternoon.  Before the Convention closes on Sunday morning there will be ‘The Stars of Tomorrow’ Show.  In addition there are another three events you will be extremely foolish to miss. One is The David Williamson Experience on Thursday morning, a 90-minute whirlwind session, Johnny Thompson assisted (?) by his vivacious wife Pam delivering the Jeffery Atkins Memorial Lecture on Friday morning and of course the top class International Close-up Gala on Saturday morning

For those with stamina there are the Late Night Sessions in the Arts Centre Theatre Wednesday to Friday and a chance to see Lennart Green entertaining in the headquarters hotel The Scarisbrick at midnight on Saturday.

This is all in addition to the star lectures to be given during the Convention by Bill Malone, Rocco, Bob Sheets, Magic Al, Boris Wild, Paul Kieve, Joanie Spina, Michael Vincent, Lennart Green and Robert Baxt plus a Balloon Workshop.

With the Stage Competition for The British Ring Shield and the Close-up  Competition for the Zina Bennett Trophy, a seminar on The History of Mystery and a new innovation Celebrity “Ask the Experts” with Johnny Thompson, Paul Kieve, Joanie Spina and Tim Gabrielson and not forgetting the Giant Dealers Exhibition, the British Ring Convention of 2007  is not only high in quality, it is also complete in content. Why not contact Neville Johnson now on 01202 –873234, by e mail at nevillejohnson25@aol.com or down load a Registration form from this website and pay by Paypal.

It’s just too good to miss!  And there’s still time to book.