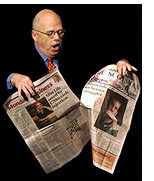 As well as including a wide range of magical brilliance from around the world, some of the very best of top British talent has not been overlooked. One is Geoffrey Durham who is still enjoying a most successful career in the world of entertainment. And what is more he has done everything, not only as an actor, presenter, director, celebrity, broadcaster, after dinner speaker, magician but initially as a stagehand and busker.

It is fitting that he will be delivering the annual Jeffery Atkins Memorial Lecture as Jeffery was a great admirer of Geoffrey’s work and was hugely impressed by his one man show, ‘One Man’s Intrepid Journey Up His Own Sleeve’ after seeing its launch at the Kings Head, Islington.

Geoffrey is entitling his lecture ‘Finding the Magic Ingredient’. It is an entirely brand new lecture that he has created exclusively for the Eastbourne Convention. In it he will be exploring the techniques, which raise magic from “someone showing off some tricks” to a performance skill, which can launch an entire career spent in the public gaze. Drawing on his thirty-five years experience as a professional magician, Geoffrey will be demonstrating and explaining material from every stage of his development as an entertainer – none of it having been featured in his lectures before- and will show how he succeeded in making these great routines his own. And there is a rumour that, for one day only there may be even a guest appearance by The Great Soprendo!

He has recently published ‘Geoffrey Durham’s Professional Secrets –A Life in Magic’ a 250 page book, a book that not only details on how to make a living from magic but how to entertain. Everybody who wants to be a magician should have this book in his or her magical library. More important it should not just linger on the shelf collecting dust. It should be constantly read and re-read, the advice absorbed and acted upon.

Make sure you are present when Geoffrey Durham gives what is bound to be a spellbinding and engrossing lecture.

As well as presenting the ‘Safire Magic Light Puppet Show’ in the Children’s Showtime, Safire the illusionists will appear in one of the six stage shows. Stuart and Jayne are to be congratulated on the constant updating of their act and devising novel and entertaining twists to several of the well-established illusions. This has been witnessed in the recent 60-date tour of the ‘Chuckle Brothers Indiana Chuckle and the Kingdom of the Mythical Silk’ show. This extensive tour will be followed with a number of dates with the Jimmy Tarbuck Show prior to a lengthy summer season in Bridlington and Blackpool. What a pleasure it is to report to the success of this engaging couple, who over the years have been such staunch supporters of the British Ring.

By the way those of you who were knocked over by their Magic Light Puppet Show in Southport in 2005 will be more than impressed by their latest presentation as were the audience, both young and old that packed the Kings Theatre Southsea on this Spring Bank Holiday Monday.

Whenever and whenever he has performed over the past 70 years Mark Raffles has always been a joy to watch whether it be with doves, chicks, dogs, or manipulating cards, billiard balls, cigarettes, or pick pocketing. To think that this all started with, as Mark reveals in his book ‘Diamond Jubilee Memoirs’, with an act consisting of Card in Sand Frame, Die Box, Egg-bag, ropes through the coat, coil streamers from opera crush hat, Goldfish Bowl Production and concluding with a Goodnight Banner in a talent show that he won and received 10/- at the Grand Theatre Failsworth Manchester. His first professional engagement in 1938 was at the Queens Park Hippodrome Manchester as Ray St Clair with a silent manipulative act and spent the following years with this act touring the Variety Theatres throughout the United Kingdom.

When during WWII he was working for ENSA he had to perform two spots. Inspired and influenced by Giovanni, who he had seen pre-war, he developed a pick-pocketing act for which he had to speak. In doing so it helped him to overcome his stammer and evolve a delivery that has become his trademark. With his act he changed his name to Mark Raffles and instead of finding himself down among ‘the wines and spirits’ on the bill he was headlining it. With the closing of the majority of the Variety Theatres, Mark adapted his act, just as successfully to suit a cabaret audience.

Mark still wows audiences that can only come from seven decades of experience in the business. He will be wowing you in Eastbourne.

In 2000 at Eastbourne a smart confident young man gave a lecture that many considered to be the best at that Convention. In the main his magic was his own presentation of standard effects but each had a touch of originality in presentation and method that only comes from frequent performance. And who was that young man? Nicholas Einhorn.

He’s back again this year with another lecture having spent the intervening years becoming one of the most sought after magicians for private parties, corporate events and trade shows. So how has this success come about? Not only having great technical Skill and a radiant personality but also making his magic visual that takes his audience by surprise and having every effect very clear so as to be clearly understood.

In magical competitions Nicholas has been outstanding. In 1996 and 2002 he was ‘The Magic Circle Close-up Magician of the Year’ and in 2003 came second in the Micro Magic category at F.I.S.M. the World Championships of Magic. Additionally in 2005 he was voted ‘The Magic Circle Centenary Close-up Magician’ as part of this prestigious magical society’s centenary event.

Nicholas is the author of two very successful books ‘The Art of Magic’ and ‘Magical Illusions’ selling 500,000 copies. He is constantly marketing new concepts and magical effects for the magical fraternity. His ‘Haunted Deck’ is a best seller for the close-up worker and his ‘In Flight’, a self-levitation has been used by Paul Daniels in one of his TV programmes. For the mentalist he offers ‘Word in a Million’.

If it is your ambition to be a sought after close-up magician or to enter the world of corporate engagements be at Eastbourne where you will learn from a master of his craft Nicholas Einhorn. Besides lecturing Nicholas will also be part of the International Close-up Gala team so you will be able to see at first hand that he practices what he preaches.

There is still time to enter this year’s Close-up Competition for the Zina Bennett Cup plus a Cash Award of £1000 as 1st prize, £500 cash for second prize and £250 cash for third prize. In addition the Rovi Trophy may also be presented to the competitor exhibiting a high level of skill with playing cards in an entertaining manner.

There is no entrance fee but each contestant must be a paid up member of the British Ring and have registered for the whole Convention. Application forms to enter can be obtained from Steve Evans, 22 Old Fallings Lane, Wolverhampton WV10 8BH mobile number 079001 191958 email: stevemagicbloke@aol.com Application forms must be returned BEFORE 23rd July. You haven’t got much time left to apply so if you decide to enter apply NOW.

The Registration desk is open and Neville Johnson is waiting to take your call either by telephone on 01202 873234 or by email at nevillejohnson@aol.com. You can also book on line and pay by Paypal. Go to our website www.britishring.org.uk for details.