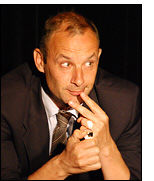 Due to the untimely death of our President Derek McFaull Past President John Styles MBE has graciously agreed to take over the Presidential duties at the Convention. He will preside over all events until the installation of Trevor Lewis as President foe 2008-2009 after the presentation of awards on the Friday evening. The Rev. Alan Clarke M.A. has also agreed to conduct the non-denominational Church Service on the Sunday morning. To both these members the Officers and Committee express their sincere gratitude for taking on these responsibilities.

After too long an absence Richard McDougall returns to the Convention Stage. It is Paul Stone’s, our Convention Executive Director’s view that Richard is one of the most underrated magicians of this country, a view that is rightly shared by many others. But what is it that makes him so different from the rest? It could be his technical ability as Richard’s is excellent. But it is more likely to be in the body language he creates when performing, for this is one of his great strengths. With ease he is able to communicate and project his personality to every member of his audience whether they occupy seats in the front row or at the back of any theatre. Sadly it is a skill that is lacking in the performances of many of today’s magicians applying not only to those on a stage or platform but those at the close-up table. They seem unable to create a sense of theatre by forgetting that they are the entertainers and rely on whatever props they are using to be the entertainment and not the tools allowing them to create the mystery.

How many of you remember Richard’s two successes in the British Shield Competition? He first took the Conventioneers Trophy for Originality in 1988 to be followed by the Tom Harris Cup for Comedy (at Eastbourne) two years later. 1994 found him being awarded the title of World Open Champion of Close-up Magic in the Isle of Man. His best achievement was at F.I.S.M in Dresden when he took 2nd place in the Comedy Category.

Over the years Richard has performed in forty countries around the word performing close-up and on stage with many television appearances in Britain, Europe and South America. He has also been engaged as an advisor on several television projects and was co-writer on the Derren Brown Mind Control Show that went on to win the Silver Rose in the Montreux TV Festival.

These days his time is split between a hectic performing schedule and giving talks to the business community of the importance of body language in commence, especially in the giving of presentations.

So carefully observe how Richard McDougall uses body language when he performs for you in the Late, Late Gala on Friday evening. The dictionary defines body language as the process of communicating through conscious or unconscious gestures or poses. Get it right, as Richard does, it will enhance your performance and raise your profile to a higher level. Get it wrong and you may be considered smug or pompous.

You will see from the programme there are to be Late Night shows on Wednesday and Thursday nights in the Floral Hall. They will feature a variety of performers and will include names like Michael Weber, Mike Finney, Bill Herz, Levent, John Archer. Paul Stone is guaranteeing two excellent shows so it is up to you to save some of your energy to enjoy these bewitching hour sessions.

So head to Eastbourne on the 24th September and participate in four fully filled days of magic. Registration Officer Neville Johnson spends most of each day processing your registrations and will be pleased to take care of yours if you have not already made your application. You can get in touch with Neville by phone on 01202 873234 or by email at nevillejohnson25@aol.com. You can also make a registration by going to the Payments Page on this website. Is there any thing you would like to know about the Convention? Public Relations Officer Bob Hayden will be pleased to help you. Contact him on 023 8832 0277 or email him at bobring25@aol.com.