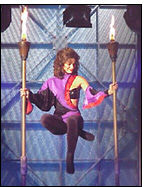 This is the last call for Eastbourne 2008. In just four days from now and precisely at noon in The Congress Theatre the Official Opening Ceremony and welcome to our Overseas Visitors takes place by Past President John Styles M.B.E. in the presence of His Worship The Mayor of Eastbourne Councillor Greg Szanto, the International President of the International Brotherhood of Magicians Joan Caesar and the president of F.I.S.M. Eric Eswin. This of course, should have been performed by Derek McFaull who was so looking forward to conducting it as the climax of his Presidential year. Sadly he died on 4th August and the opening will be the appropriate time to remember him for the valuable service he gave to the British Ring as President, Chaplain and Chief Welfare Officer.

This ceremony heralds the start of four days packed full of mind boggling magical events for the hundreds of magicians who have gathered from the four quarters of the United Kingdom and from over twenty countries around the world. In numbers attending the British Ring Convention is not the largest in the country. Today’s organisers strive to emulate the aims of those who originally initiated the Convention that was to provide an opportunity for magicians whether professional, semi professional or amateur to gather in a convivial atmosphere, to swap ideas on magical skills and presentation at the same time being able to learn from their peers who generously reveal their secret and watch them their performances that have made them the Stars of Magic. In the1930’s, with air travel in its infancy, it was not possible by the Convention organisers to attract any prominent overseas magicians of that era to attend. What a difference it is today!

And just to remind you the Convention boasts six stage shows, two close-up shows, two Late Night shows, sixteen lectures/workshops and a collectors seminar as well as two Competitions and a Dealers Exhibition.

For those of you who might have just found this page we are going to give a snapshot of the events. The first must be the Saturday Night International Magic Show. It is hosted by Las Vegas mega Star Jeff Hobson, who will be introducing large scale Illusionists Kalin & Jinger (photo) with a 40 minute act, the legendry Norm Neilson with his ‘Floating Violin’ act (it will be your last chance to see him before retirement), the incredible Tony Chapek with his ‘Interactive Media Magic’, Royal Command Performer Raymond Crowe, Michael Finney rated as having one of the funniest comedy magic acts in the business, Jason Byrne and his ‘Post Modern’ act direct from Las Vegas and the sensational juggling of Claudius Specht. This is a show you will talk about long after the Convention has ended. In addition the Opening Show, the Thursday Night Show, the Eddie Dawes Show, the Late Late Gala and the Stars of the Future Show all include a variety of star magical talent.

If close-up is your forte there are two shows you will not want to miss, Juan Tamariz’s One Man Show and the International Close-up Show with newcomers Derek DelGaudio, Jason England, Glenn Farrington, Bob Kohler, Jon Armstrong and our own Nick Einhorn.

Mandy Davis is organising a Workshop on Saturday afternoon at 17.00 hours just for Junior magicians from 10 to 17 years old. Anyone under the age of 10 and over the age of 18 will not be allowed to join in the session. As well as helping and advising you on any problems you may have be they of a technical nature or in presentation, she has arranged for some very special guests to be present, Jon Armstrong and John Born both from the United States. When Jon Armstrong performs he combines card magic humour and audience participation and makes the unexpected happen. He has a dynamic personality, which he blends with imaginative presentations bringing wonder to all who experience him. For the year 2007 the Academy of Magical Arts named him Close-up Magician of the Year.

In Mandy’s other guest John Born you have an exclusive. He is not participating in any other event during the whole Convention. He has come to Eastbourne 2008 as any other registrant but for Mandy he has agreed to talk to you. He is famed for his Locating a Card at any Number routine. So come on you Juniors be in the Congress Suite for this event. You can then boast to your elders that you have seen and learnt from a Master Mentor they haven’t been privileged to see!

Two of the speakers in this year’s Collectors Seminar Paul Freeman and Roy Field are both members of the Scarborough Circle of Magicians. Their involvement in the Convention came to the attention of the Scarborough Evening News and its sister paper the Filey Mercury. Their subjects Noms de Theatre: Names to Conjure With and Dleisfen, The Forgotten Other British Ring Secretary proved to be of interest to the papers Editors especially as 2008 marks his birth in Bridlington. Dleisfen, an anagram of his real name Dick Nesfield came to magical prominence as a young man in Bridlington publishing numerous tricks in magic magazines. He left the area in 1932 and into magical obscurity to return to Bridlington in the 1960’s. It all resulted in a lengthy article on Roy together with a photograph in the Filey Mercury.

If, at any time you are participating in the Convention why not call your local paper and explain your involvement. The outcome could give you some good publicity at the same time publicising the British Ring. Give it a thought.

There are a sizable number of you who this year are attending not only a British Ring Convention but also a National Convention for the first time. From feedback we have discovered that some first timers, particularly the younger ones have found the experience to be somewhat inhibiting and daunting. This feeling must not be allowed to exist and must be immediately banished from your minds. The Ring’s Officers, members of the Management Committee and Stewards all wearing distinguishing badges indicating their individual roles are there to welcome you and help you if you find yourself in difficulty or require information. Your enjoyment of the Convention is of their uppermost concern.

So what do you have to do? First thing, if you have preregistered it is to pick up your registration pack from the Registration Desk, which will be situated in the foyer of the Congress Theatre. One of the items it contains is your Registration Badge with your name on it. It is important that you prominently display this Badge when you wish to attend any event including a visit to the Dealer’s Exhibition, as the Steward on duty will check you as a bona fide Conventioneer. We regret having to implement these checks and regrettably there are a few magicians who try to sneak in to avoid paying for a registration. By displaying your Badge prominently you make the steward’s job easier and avoids any unpleasantness or misunderstanding. If you have still to register the staff on the Registration Desk will do this as quickly as possible. There will be two entrances to the Convention events and Dealer’s Exhibition either by way of the Congress Suite from the Congress Theatre foyer or the Winter Garden Entrance but without a Badge the Security personnel will redirect you to the Congress Theatre.

Registrations for either the whole Convention or for the Day will be accepted from 10.30am onwards on Wednesday 24th September at the Registration Desk.

We look forward to meeting you all in Eastbourne.