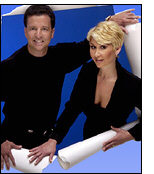 For the first time at a British Ring Convention we will be able to enjoy an act that has thrilled audiences around the world. I am of course referring to the stunning quick-change act of David & Dania. From the moment it made its debut in 1996 it has audiences everywhere responding to it with tremendous ovations.

It is a magical transformation and is the creation of David Mass and Dania Kaseeva. It is a combination of a series of ballroom sequences with a sequence of dramatic and colourful costume changes. Every time it is performed it becomes a show-stopper. And it is not only the costume changes by Dania that are so brilliant it is also some fast magic by David that compliments and enhances this incomparable act.

How did this extraordinary act develop? It started in 1995 when David met Dania on a circus tour where Dania was performing her award winning hula hoop act and David was working as a singing ringmaster. Both came from a show business background, Dania being the daughter of Russian circus legend Rustan Kaseeva and David the son of a concert pianist Jerry Robert Mass. Starting training as a gymnast aged six Dania went on to acrobatics and dance. With these talents she created a hula hoop act and made her professional debut aged fourteen in a touring production of the Moscow State Circus. She soon established an international reputation with the act not only for her masterly technique but her vibrant stage personality. David’s first circus act when aged eight was juggling on a low wire. He then trained in acrobatics, dance and theatre and found he had a talent for singing. Additionally he successfully studied magic another strength that over the years has made a considerable contribution to his success in the world of entertainment. Not only will you see the amazing and lavish act of David & Dania on the Southport Theatre stage but you will be treated to Dania’s Hula Hoop act.

Another first-timer at a British Ring Convention is Soma. With his individual style of modern magic, Soma has regularly won awards throughout this current decade from numerous European countries from the time he took 1st prize in the general magic junior category in Budapest Hungary in October 2000. Last year he gained 1st prize on three occasions in Abano Terme Italy, Meribel France and Baden Switzerland and this year the Golden Lion award in Las Vegas. From Domenico Dante F.I.S.M International Vice President comes this testimonial "I saw Somo’s act at the beginning of his career when he was competing in our Italian International Convention. Since then he has made terrific progress reaching a professional standard where manipulation, showmanship charisma mix in an act that can be part of any International Gala. I am sure we will see him in most conventions all over the world. He deserves it."

So who inspired this young Hungarian to pursue a career in magic? There were two. They were from his home country Mr Jupiter who we enjoyed seeing at our 1995 Convention and that Wild Man of Magic from America Bob Little. Both must feel proud that their magic had such an impact it was able to inspire and develop one of today’s young International Stars of Magic.

We look forward to seeing Soma in Southport when he performs his immaculate manipulations with mobile phones. As Uri Geller observes "Soma’s telephone act is so bizarrely unique, I have never seen anything like it! His astonishing hand manipulation is faster than the ring itself." All of you like Uri will be captivated by Soma.

Considerable interest has been aroused about the extension to the Southport Theatre and Convention Centre since we were there in 2007. To give you some idea of what has occurred I will attempt to give you a verbal description of what has happened. This is probably best done by describing the alterations to the two levels of the Centre separately. The upper level will be referred to as the Promenade Level and the lower one as the Lakeside Level.

Promenade Level An imposing and enlarged entrance and foyer has been created at the northern end of the complex next to the Headquarters Hotel the Ramada Plaza. On the left of the foyer is a connection into the Hotel and on the right the Promenade Bar which gives access to the Lakeside Suite. Straight ahead is a staircase leading down to the Lakeside Level and two lifts that will be of assistance and benefit to our senior members. It is in this foyer that the Registration Desk will be found. The other entrance, the one used by the majority of you on previous Southport Conventions has been enlarged and now also has a lift to access the Theatre Foyer allowing anyone with a disability or a walking difficulty having to negotiate the stairs.

Lakeside Level This consists of the Southport Theatre, the Floral Hall (now refurbished) and the Waterfront Suite. The layout of the Theatre, Foyer and Floral Hall remain as before, but the wall to the right of the Floral Hall Stage there is access to the Gardens Bar. Continuing through the bar you arrive in the Waterfront Foyer with the Waterfront Suite straight ahead. This is the multi functional area in which a room will be created for lectures etc to hold some 200 people. The remainder of the space will be where the Dealers will be exhibiting. The Floral Hall will be utilised for lectures and close-up and the Theatre for stage shows, thus securing all the events take place in same building under one roof.

I hope this gives you some concept of the splendid facilities the Southport Theatre and Convention Centre provides for our Convention.