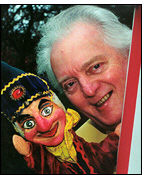 John Styles M.B.E will be delivering this year’s Jeffery Atkins Memorial Lecture at Southport. Five years ago, to celebrate his Golden Jubilee year as an entertainer John delivered what was described in the programme as a lecture ‘My Magic Life’. It might be considered by some that to describe it as a lecture might contravene the Descriptions Act for it was a highly entertaining and fascinating talk which took the audience on a journey of John’s eventful and varied life as an entertainer. He was on stage for an hour relating an endless stream of wonderful stories and anecdotes. Such was the intense interest of the audience that not a solitary person left the theatre. It was a story that had taken John from Pubs to Palaces, from Beaches to Broadway and from House Parties to Hollywood. For the packed audience it was over far too soon. An hour was just not long enough. At the very least, they considered, John should have been allocated another hour.

In his Budget report on the talk Brian Eames considered listening to John was the highlight of the Convention, a view that was shared by many others. For the young up and coming and even the not so young entertainers so much could be learnt by just watching and listening to John.

John is back for a repeat performance together with some more of his intriguing and varied experiences. Don’t expect John to demonstrate any tricks. He will not be telling you how to do a ‘top change’ or to make an elephant vanish but what you will get is a further insight into the life of one of this country’s most gifted entertainers. John’s experience in the world of entertainment extends beyond the usual run of children’s parties, variety and cabaret engagements. It may be forgotten that he has worked on feature films for Stephen Spielberg, Danny Boyle, Michael Winner, Robert Zemeckis and Tom Stoppard as well as advising and performing in numerous television programmes for both children and adults. He has also entertained passengers on many of the world’s luxury cruise liners and has spent a record 22 years as the close-up magician in a fashionable restaurant in London’s West End. It has been his honour to privately entertain members of the Royal Family and dozens of celebrities.

As British Ring President for the year 2006 -2007 John together with his wife Barbara enhanced the prestige of the British Ring. Last year when President Derek McFaull died so suddenly in office they both unselfishly agreed to carry out all of the presidential duties at the Convention until the installation of Trevor Lewis had been made.

Make sure you are in the Southport Theatre at 10.30am on Friday 25 September when John Styles takes to the stage when you will learn a lot more of John’s fascinating experiences from his magical life – and be well entertained in the process.

There is going to be another Balloon Workshop this year by Mike Stokes of Playtime Balloons the previous two having proved to be very popular by being very well attended. Mike’s instructions are always extremely clear and presented with a great sense of humour. The object of the first workshop was the making of Balloon Flowers with most of the 225 people participating being able to produce by the end of the session a very passable balloon flower. The second workshop focused on Balloon Fruit. Mike has not yet released what the subject of this year’s workshop will be but as soon as we have any news of its content you will be informed. Even if you have only limited experienced of balloon modelling or have no experience at all but want to include it in your programme you will most certainly benefit from Mike’s tuition.

In his workshops Mike is assisted most ably by his wife Margery and Gerry Luff with the Qualatex Balloon Co. generously donating the balloons to those attending the workshop and who are anxious to learn the skills necessary to become a competent balloon modeller. It is hoped the Company will continue their generosity for this year’s session.

Registrations are now being taken for the British Ring Convention. You can register by going to the British Ring website at www.britishring.org.uk or contacting the Registration Officer Neville Johnson either by telephone on 01202 873234 or by E.mail nevillejohnson25@aol.com.