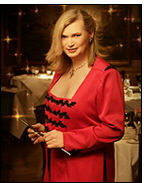 In the Late Night Magic Shows of the past two Conventions there was an abundance of fine and entertaining magic performed but the atmosphere that had been generated by the Fringe shows in past years was clearly lacking. The Fringe for many of the Conventioneers was the highlight of their Convention. Here’s some great news. It is now confirmed that this year the Fringe is returning. The Fringe is completely independent of the British Ring and is essentially a series of additional free shows organised and has been to date financed by Fay Presto. This year Fay has received some commercial sponsorship from the dealers ‘Magic Cave’, so it’s a big thank you to them for their support for without the Magic Cave it would not have happened

Fay takes a lot of trouble to create a good environment for her performers. The audience do not sit in rows of seats theatre style but around tables as for watching a cabaret and enjoying a drink. The audience is not entirely made up of magicians. ‘Normal people’ are invited to the venue to give the performers a real audience. Another feature that Fay arranges is the Fringe Banquet as an alternative to the formal Convention Banquet. For this you order your choice of takeaway food to be delivered to the venue, eat it, and then sit back and enjoy the cabaret. The Fringe will be taking place in the Southport Arts Centre in Lord Street. There will be no advance announcements of those who will be performing at these shows but those with stamina and for whom sleep is of little importance they will be guaranteed an exceptional and memorable magical experience. Fingers crossed and ‘Bon Voyage’!

Ed is a professional magician residing in Canton Ohio and one who travels the world performing magic. For over 25 years Ed has been performing close-up magic, sleight of hand illusions and full time table magic for Hollywood and television stars as well as famous sports figures. He has performed at Las Vegas’s Caesar’s Palace, lectured and performed at the world famous Magic Castle in Hollywood and was the star of the Ed Ellis television show in 2005. He won first place for close-up at the International Battle of Magicians in 2006. His style of card and rubber band and ring magic is visually stunning with minimal amount of process. You are particularly advised to watch out for his effect Ringature. It has been described as a close-up workers dream effect. Ed can blow your mind with a deck of cards in his hands. He is a master at card manipulation and brings a real sense of the impossible to his moves.

Ed will also be lecturing. He has marketed several DVDs. His volume two DVD ‘You Blue It’ was reviewed by the Magic Café as the best single trick DVD they had seen while his volume five ‘The Castle Routine’ was reviewed by On Line Visions as being packed with striking visuals that will have advanced card workers anxious to learn and his volume seven ‘Totally Blue It’ has been described by the Magic Café as the best colour changing deck routine they had seen. If you are a card manipulator Ed Ellis’s lecture is a must for you.

The Brits who attended the recent IBM Convention in Nashville and saw Ed Ellis working speak highly of his work and are sure he will be greatly admired and respected at Southport.

Since announcing that the Micro Magic Marathon was continuing to be an event in the Convention programme there have been enquires from those who are either new members or were not at Eastbourne last year about its purpose and how it operates. At the Committee meeting in January 2008 Ali Bongo expressed his concern that magicians whether they be professionals, semi professionals, amateurs or just hobbyists were forgetting what Conventions were for. The dictionary definition of convention is ‘a coming together’. For magicians it is a gathering of like minded individuals who perform, watch, buy, sell, discuss and love magic; an assembly of enthusiasts who want to meet friends they may not have seen for a year, to chat, to reminisce, swap ideas, to grumble about the way things are in the world – in other words socialise. It should be more than just watching, listening and learning. A Micro Magic Marathon (M.M.M.) would be such an event that would facilitate the chance to socialise.

He went on to explain how it would operate. Each contestant would be given a number and he/she, in the hour allocated would have to perform to as many tables and groups as possible. The Conventioneers would have cards to register their thoughts and at the end of the session would record on the card just the number of their favourite performer. After the cards had been collected the performer with his or her number on most of the cards would be declared the winner. There would be no official prize so as not to compete with the official close-up competition but some token presentation would be made together with the glory and satisfaction of being the ‘Peoples Choice’.

Of course how the performers would approach the challenge would be up to the individual. The choice of material would be important. Originality, diversity, brevity, stamina, charm and charisma would be paramount. Ali’s advice would be to perform a short sharp show avoiding standard items that were likely to be used by others.

The M.M.M. was included in the programme and the two desirable objectives of the event were fulfilled – under the nose magic and socialising. Everyone became a participant instead of being purely a spectator. So come on all you table hoppers prepare a snappy and entertaining routine and inform this years event organiser Viv Davies your intention to participate. His telephone number is 029 2079 2789 or E-mail him at Mysteeny@btinteret.com Last year the M.M.M. produced some serious close quarter magic and heaps of hilarity for both audience and performers. It will do so again this year.

These are more good reasons why you should make arrangements to attend this year’s British Ring Convention in Southport September 23rd to 27th. You can register immediately using this website. At £125 per person (£100 for British Ring Members and their Partners) it is real value for money.