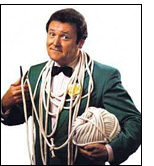 We have continuously up-dated as to who will be performing in both the stage and close-up shows so it is now time to put the spotlight on the lectures/workshops that are to be given in Southport and wherever possible the content of the lecture. The organisers have made every effort to make the lectures as diverse as possible and to include at least one to suit your particular interest in magic.

Here is a summary of the lectures that will be given over the course of the four days.

Stand-up/Stage Magic: Pavel (photo) will be giving a lecture entitled “Best Of” in which he will be performing and explaining a dozen of his proven and successful stand-up effects. A few are ancient (and therefore may have been forgotten) others will be his latest hits. If you are new and commercial effects for stage, stand-up, parlour or even your children’s show you will certainly learn something you can easily include in your next programme.

Mental Magic: Sean Taylor is known as a comedy magician and mentalist and is able to fit his one hour show into a briefcase. With a background as a marketing and management consultant and a highly developed intuition has enabled him to ‘read’ his audience and led him to create a truly remarkable mind reading act. His workshop “Selling the Show” is how to sell magic as an entertainment. You will gain valuable advice from Sean irrespective of the form of magic your particular forte is.

Balloon Modelling: In any Balloon Modelling Workshop that Mike Stokes gives his instructions are always clear and presented with a great sense of humour. This year his workshop has the intriguing title of ‘Let’s get away from Swords – the alternatives!’ Even if you have no experience of balloon modelling and would like to include it in your programme you will most certainly benefit from Mike’s tuition.

Close-up: Hayashi’s lecture concentrates on his cutting-edge work in the fields of coin and card magic. He teaches mind-blowing routines that can be performed with a regular pack of cards and four ordinary coins. These are the items he carries on his person everyday of his life which enable him to spontaneously do an entire show anytime, anywhere. He covers routines which range in difficulty from intermediate to amazingly easy.

Children’s Magic: Terry Herbert is acknowledged worldwide as the Crowned Prince of Children’s entertainers with a lifelong experience in doing so. He will be showing some of the tricks he regularly uses and those most important ‘bits of business’ which children love. Next he explains the tricks and what effect he is trying to achieve. Here is an opportunity for you to learn from a Grand Master of children’s entertainment.

Stagecraft: Brando & Silvana will be delivering a lecture on Theatrical Magic that embraces dramatic structure, motivation, logical justification for the magic, personage, and the use of different techniques that can enhance the magic. It is a lecture on our art that is rarely available let alone given and is one which if you wish to heighten your persona you should attend.

Close-up: Ed Ellis specialises in card and rubber band magic. He is a master at card manipulation and brings a real sense of the impossible to his moves. You are particularly advised to look out for his effect ‘Ringature’. It has been described as a close-up workers dream effect. His DVD ‘Totally Blue It’ has been described as the best colour changing deck routine ever seen. This is a lecture you card manipulators must not miss.

Ventriloquism for Children: In his lecture ‘Talk to my Hand’, John Kimmons will not only be exploring and showing how ventriloquism with hand held animal figures can add to and enhance your children’s show but will be detailing the skills to master this art form. It is one that is increasingly becoming popular as an alternative to balloon modelling and one you may well want to adopt.

Close-up/Stand-up Magic: Be prepared for anything when Thom Peterson takes to the stage to conduct a workshop that draws from his considerable collection of close-up and stand-up routines. He will be giving slants on presentations that have enabled him to label himself as ‘An Amazing Guy’ and approaches that make an audience laugh like a little child and makes everyone of his shows an interactive one where the audience does not just watch but experience the magic and comedy. It is possible you will be inspired to adopt a completely different approach to the way you perform.

Act Development: Many of you must have thought how the magical transformation act of David & Dania was initially conceived and how was it developed into the highly successful spectacular it is today. You will find many of the answers to these questions when John Pye holds a conversation with them and they reveal how it all came about. This is a unique opportunity to discover the thoughts of two of the world’s greatest exponents of the art of rapid costume change.

Close-up/Stand-up: Tyler Wilson from Alberta Canada is another stand-up/close-up comedy magician and known as a bit of a joker. His card work is clever, creative and entertaining. He is famed for his table hopping and performing for corporate clients and is held in high esteem by the likes of David Acer and Joshua Jay. Finger Flickers will be learning a lot from Tyler Wilson.

Close-up: Henry Mayol’s magic is simple, effective and completely unique to him. He is the complete professional working with French elegance, humour and poetry. In his close-up work he uses mainly coins varying his routines from what is standard. For instance he does coins through a thick book instead of a table. From his newly opened magic shop in Paris he sells we are told some of the best fake coins in the business.

The Jeffery Atkins Memorial Lecture: This prestigious lecture is being given by John Styles MBE. Don’t expect John to demonstrate any tricks. He will not be telling you how to do a ‘top change’ or to make an elephant vanish but what you will get is a further insight into the life of one of this country’s most gifted entertainers. John’s experience in the world of entertainment extends beyond the usual run of children’s parties, variety and cabaret engagements. It may be forgotten that he has worked on feature films for Stephen Spielberg, Danny Boyle, Michael Winner, Robert Zemeckis and Tom Stoppard as well as advising and performing in numerous television programmes for both children and adults. He has also entertained passengers on many of the world’s luxury cruise liners and has spent a record 22 years as the close-up magician in a fashionable restaurant in London’s West End. It has been his honour to privately entertain members of the Royal Family and dozens of celebrities. So reminisce with John as he travels down memory lane talking about some of his intriguing and varied experiences

Programme of events – subject to alteration

Some might consider that these lectures/workshops alone are worth the registration fee of £100 for British Ring members and their partners (£125 for non-members and £65 for juniors 18 years of age or under). The Convention starts in three weeks time so now is the time to make your registration by contacting the Registration Officer Neville Johnson by telephone on 01202 873234 or by e.mail: nevillejohnson25@aol.com