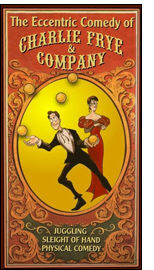 We are delighted that Charlie Frye & Company will be returning to our Convention in September. For many they were the highlight of the 2006 Convention with their unique original eccentric comedy act of juggling, sleight of hand, physical comedy and much more. If you did not attend in 2006 make sure you are present this year for Charlie Frye and Company will never fail to keep you laughing and applauding at the same time. So who are Charlie Frye and Company? Charlie Frye plays the rubber-faced put upon juggler/magician while Sherry Frye, his wife, is the elaborately bored beautiful assistant. Charlie amazes; Sherry yawns.

They are the very personification of America’s rich vaudeville tradition who synthesize skills and a passionate love of their art into something classical yet undeniably fresh – something that astounds even as it entertains. Charlie has the accolade of often being compared to classic comedians such as Charlie Chaplin, Buster Keaton, Stan Laurel and Dick van Dyke.

In her reviews of Charlie’s stage and close-up work in 2006 Mandy Davis reported he performed a super mixture of magic and juggling to music both impressive and excellent. In his report on Charlie’s lecture “Eccentricks with Charlie Frye” Ross Quinn described it as a whirlwind of magic and juggling, manipulation, humorous anecdotes and dozens of original sight gags adding that Charlie’s personality immediately endeared him to the audience and it had been his privilege to see such a talented performer. Off stage he was the really nice guy as he was on.

How many of you were at the Hastings 1970 Convention? If you were, no doubt you will remember a Dutch magician Goochel-Flip performing in the Gala Show. Flip as be became known was making his debut at a British Ring Convention. What puzzled many prominent magicians watching his act were the modus operandi of several of his moves. What they didn’t know they were seeing for the first time the ‘flip stick move’ invented by him and subsequently used by a number of magicians utilising sunglasses, combs and sharpie pens in their award winning acts.

Flip has been inventing countless magical effects since 1957, L & L Publishing producing a 6 volume DVD set of his creations. Over the years Flip has won numerous awards and has a host of TV appearances to his credit worldwide.

Rumour has it that Flip is thinking of retiring in the near future. If this is correct don’t take the chance of missing what possibly could be your last opportunity of seeing this highly acclaimed creative magician in action. He will also be lecturing. It is bound to be a lecture that will be attracting a capacity audience.

These are just two of the Stars of Magic you will be able to watch and enjoy, listen to and learn in Eastbourne. So get your registration off to Neville Johnson by down loading the Registration Form from the British Ring website www.britishring.org.uk. Whatever your particular brand of magic is your forte you will find there is something for you at the 2010 British Ring Convention in Eastbourne.