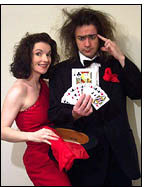 There are a number of acts that no matter how many times you see them you spot something that you have previously missed and if a comedy act still makes you laugh. Such an act is that of The Great Nardini aka Paul and Mhairi Nardini who will be appearing in the Late Gala of Magic on Friday evening.

It is from the expressions of Nardini the hapless magician and those of his frustrated assistant coupled with some brilliant timing that the comedy erupts. The genesis of the act is interesting. Paul used to perform the act as a solo one until it was seen by Ali Bongo who suggested that his wife Mhairi get involved. It was some of the best advice they could ever have received as together they developed it into an award winning act cumulating in them winning 1st prize in the comedy category at the 2003 Netherlands F.I.S.M. To them it was their top magical moment.

There have been others than Ali to have offered advice and Paul considers himself extremely fortunate to have been given it from many talented and respected people, two of whom are John Archer and Bill Seagraves aka The Great Notso. In the early stages of performing the act Paul spoke a few lines. Bill, although loving the act, made a suggestion. He thought in the part where Paul spoke it had the danger of killing the character he had built up in the spectators mind. Paul took heed of Bill’s suggestion and realised by remaining silent it would make it possible to perform it anywhere in the world.

Paul and Mhairi have had the privilege of performing the act in Gala Shows and Conventions all over Europe and in Las Vegas and the Magic Castle Hollywood.

As is usual with many boys Paul reveals he first got interested in magic at the age of around 7 when his mother bought him a magic set and a magic book for Christmas. He loved the Paul Daniels shows and even remembers David Nixon on TV. He drifted away from magic when he was in high school because he formed a Rock band called ‘Militia’ later renamed ‘Running Scared’ and this took him right through until his late twenties. By then he had realised that his chances of rock stardom were doomed and he looked around for other ways to get his kicks.

By buying ‘The mark Wilson Course in magic’ his interest in magic was rekindled and he fell in love with magic all over again. He had a keen interest in Tarot Cards and read many books on the history and meaning of the cards resulting in him doing readings for people. But he was to become troubled by the importance that women in particular were putting on the cards and stopped doing readings. He wasn’t happy being associated with other readers who were happy to exploit and capitalise on that fear.

This led him to his main interest in magic Mentalism. It’s all the rage now but when Paul was first learning mentalism it was looked upon as being boring and ‘easy’ magic for magicians who couldn’t do sleights. Paul is thrilled that Derren Brown has changed all that and has shown how exciting and powerful mentalism can be.

Paul opened a TV and video repair shop in 1993 which he ran until March 2001 when he decided to make a living being a full time magician, a decision he has not regretted taking. He mainly does private parties and corporate functions but avoids kid shows. He leaves those to the experts.

We have not seen any of Paul’s mentalism at our Convention. Perhaps one day we will. The biggest mystery surrounding Paul is what inspired him to develop The Great Nardini act, so different from his first love mentalism! Perhaps one day he will tell us.

If you haven’t seen The Great Nardini perform be prepared to have your sides aching with laugher. If you have seen the act they will still ache!

The Great Nardini will be joined by Steve Hewlett and Friends in the Late Gala Show. Steve is a young innovation in the World of Comedy Ventriloquism with just the right mixture of comedy and ventriloquism. What is more he writes his own material. John Pye had no hesitation in booking him for Eastbourne after seeing him perform at the recent Northern Magic Circle Spring Parade.

TV and radio credits as well as a successful reputation on the Cabaret Circuit have earned Steve a great step on the ladder of top ventriloquists. He is a favourite among Theatres and Cruise Ships and is proud to have performed on board on the QE2 for its last ever Atlantic crossing from Southampton to New York. A succession of Pantomimes and summer seasons have taken him from strength to strength year after year ending 2009 on the Ken Dodd tour. Bruce Forsyth has afforded him a great accolade when he said ‘What a wonderful act. I wish I was his agent’.

In the 73 previous British Ring Conventions some of this country’s and the world’s ventriloquists have appeared. Steve Hewlett joins that elite company.