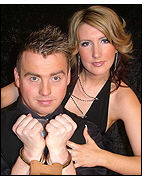 Appearing in the International Magic Show is someone who for the past six decades has been the countries best and most loved hand puppet, Sooty. His first appearance at a British Ring Convention was in 1955 when he was on the hand of Harry Corbett. Sadly Harry is no longer with us but Sooty now lives on as popular as ever. These days he is on the right hand of Richard Cadell who took over the role when Harry’s son Matthew retired in 1998. Between 1998 and 2004 Richard toured the country with six stage shows. He acquired the performing rights to Sooty in 2008 when they were put up for sale by HIT Entertainments. Richard acknowledges that watching Sooty as a child was the first time he had seen a magic wand and it was Sooty who had inspired him to do magic himself. Richard was determined to make Sooty soar again and 2009 saw him touring the country once again with Sooty and of course Sweep and Soo in a show ‘Sooty in Space’, a show full of traditional values. The show was a reworking of one of the scripts written by Matthew Corbett who remains in close contact with Richard. A brand new TV series is now in development where the emphasis is to go back to the early inspirations of Harry and Matthew.

Richard Cadell is best remembered by British ring Conventioneers as a top rate illusionist especially for his presentation of the Dizzy Limit when he and a motor bike vanished in mid air to reappear from the back of the theatre and ride down the aisle to the stage. Since becoming the presenter of Sooty has Richard noticed any differences in his life style? There is one most definitely, one which he gives with a broad mischievous grin on his still boyish face. ‘At the end of the show with Sooty & Co it is a case of putting them into a carrier bag, accomplished in a few minutes. With illusions it took hours to dismantle them and carefully pack them. That’s quite a difference!’

In Eastbourne Richard will be meeting up with the person who sold Sooty to Harry Corbett back in 1948. Bill Lamb a respected member of the British Ring for many years when he was aged 16 would help out in Paul Clive’s Magic Shop on Blackpool Pier. One afternoon he was demonstrating little magic tricks with a bear puppet on one hand and a magic wand in the other hand when the demonstration was seen by Harry Corbett which so impressed him that he said ‘I can use that’ and there and then bought two bears. When Bill saw Harry and Sooty performing a couple or so years later he thought ‘Hang on that’s what I use to do. If I had persevered I could have done that and made some money’. Maybe it was a missed opportunity Bill but you enjoyed a successful career as an engineer, being a magician as a sideline and being for many years an organiser of the Blackpool Convention.

A workshop on Escapology is a first for a British Ring Convention. It is to be conducted by Danny Hunt of Amethyst (photo). The inclusion of this workshop in the programme is aimed at magicians who might be looking to add variety to their act by including a simple escape; it is not intended to make anyone a specialist escapologist.

Danny with Annette Claire have made extensive tours both here and overseas with their spectacular and breath taking show ‘The Art of Escapology’ establishing themselves as one of the country's most exciting and innovative escapologists of the 21st century. They perform some of the most spectacular and dangerous escapes ever created with a contemporary and modern presentation.

A name synonymous with escapology must be Houdini, a man who has had as much written about him after his death in 1926 as in his extraordinary lifetime. Danny and Annette have replicated most of the Houdini escapes their greatest challenge coming when they recreated his cell escapes. Danny undertakes a complete medical examination before being locked inside some of the most secure prison cells in existence. He then makes his escape in record time. One cell Houdini declined to escape from was the condemned cell of the debtors Prison at the Castle museum in York. Perhaps the thought of the ghost of Britain’s most notorious highwayman Dick Turpin incarcerated in the cell for the last four months of his life would obstruct him. The thought of any ghost obstructing Danny did not deter him from attempting the feat. He was restrained by local police officers using six pairs of handcuffs and a pair of leg irons. He was then placed into a small aluminium box before the solid oak door was slammed shut and then locked and bolted from the outside. It took Danny just 12 minutes to escape from the cell.

How it is that Danny has been able to replicate and develop some of Houdini’s most impossible and challenging escapes? It comes from being a fully trained locksmith and using the extensive knowledge he learnt plus relentless research into his craft.

In the workshop Danny will be showing how to pick locks and then inviting you to try and do likewise using the picks. Warning! If you are caught illegally using these skills a mitigating plea that you were only practicing what you had been shown at the British Ring Convention will not be accepted by the Constabulary!

In recent years when Danny and Annette have appeared on our Convention stage either performing their fantastic escapes or wowing us with unbelievable illusions they have never failed to impress us. This young couple are shining examples of the great magical talent that exists in this country.