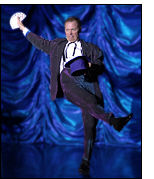 With the addition of Paul Dabek and Stephen Williams to the list of performers and or lecturers, the list of magical talent for the British Ring Convention is complete. And what a list it is! But the biggest act of magic is how Convention organiser John Pye has managed to pack them into 4 days and still ensure that there is time to make visits to the Dealers Exhibition and the most important element that of being able to socialise with other Conventioneers.

Here, in alphabetical order, are those you will be seeing:

They are responsible for 3 Stage Shows, an evening Cabaret, a Close-up gala, 11 lectures, 3 Workshops and a Collector’s Seminar. There will also be the Stars of the Future show. As the Convention coincides with the start of the new academic year there are difficulties in confirming who among the young magicians will be able to be present to perform. News of the show will be posted as soon as possible.

In addition there are three competitions, one for a stage act, one for close-up and one for table hopping, a Dealers Exhibition and Demonstration, and for the Ladies a special afternoon. This all comes for a Registration fee of £125 per person (£110 for British ring members and their partners and £65 for juniors 18 years old and under) and represents great value. The registration officer Neville Johnson is waiting to receive your application. So contact him today by telephone on 01202 873234 or by e.mail:Nevillejohson25@aol.com You can also register via the Ring’s website www.britishring.org.uk and pay by Pay Pal. An optional extra that can be booked with your registration is the Gala Dinner at £27.50 per person. A seat at £8 for the Children’s Showtime which features Clivo & Jeani (Clive Moore & Jean Ellison) Richard Cadell & Sooty, Jimbo (Jimmy Carlo), Amethyst, Stuart Brown, Philip Partridge and the I.B.M. Clowns can be booked at the Devonshire Park Theatre Eastbourne.

Stephen Williams is yet another who is making his debut at a British Ring Convention. He won the title of world Junior General Magic Champion at the Showzam Festival 2008. Since winning this title Stephen has performed in Ken Dodd Happiness Shows across the country and has toured with The Stephen Mulhern Show and Tricky TV Live and is one of the magicians and presenters in the new series of the BAFTA award winning Tricky TV. He is also Liverpool magic Circle Close-up and stage magician of the year.

Here are some of the quotes that have been attributed to Stephen.

Ken Dodd OBE ‘We’ve discovered a new star that shines bright and will twinkle for years to come’.

Stephen Mulhern ‘One of the best magicians in the business!’

Simon Cowell ‘I despise magicians, but I really enjoyed that’.

Great praise indeed for this rising star of magic. We look forward to meeting and watching Stephen Williams at Eastbourne.

It is always a joy to see Paul Dabek on our convention stage. He was last with us in 2007, the year after he won the British Ring Shield. Since then he has toured his one-man show Nothing Up My Sleeve around the country particularly in the North West where it has been seen by capacity audiences. This 2 hour show is described as an eclectic mix of jaw-dropping sleight of hand, enchanting illusion, shadowgraph and quick fire comedy presented with an impish sense of mischief. It may come as a surprise to the home magical fraternity to learn that Paul performs stand-up comedy magic but it is something he has been doing long before he won the title of The Magic Circle Young Magician of the Year in 2003.

Over the years he has worked for most of the major cruise lines as a headliner that has taken him to all 7 continents. It is for his cruise line shows that he developed the Shadowgraph act but its popularity with the audiences convinced him to include it in his one-man show. On 7th August Paul takes his show to the Edinburgh Fringe. For him it is a new challenge but one he regards as a chance to showcase himself in a competitive arena.

As well as his magic Paul works professionally as an actor. As such 2008 was a busy year for him playing the part of Lucifer in a production of The Chester Mystery Plays, a role that gained him some good national press reviews and doing a tour in the North West at Christmas with a World War I play Silent Night. He has acted as a magic special effects consultant for many theatre productions, often designing and building the props, sets and special effects.

In the world of magic Paul Dabek’s reputation as a top class magical entertainer is firmly established. With all the success that he has secured he remains indebted to so many members of the magical fraternity for their help, encouragement and friendship.

Paul, you will always be welcomed at our Convention.

Have you made your registration yet for this extravaganza of top class magic? If not why don’t you do it today. The registration Officer Neville Johnson is awaiting your call. You can contract him by telephone on 01202 873234 or by email: nevillejohnson25@aol.com Alternatively you can go to the British Ring website www.britishring.org.uk and register on line. We are looking forward to seeing and meeting you in Eastbourne.