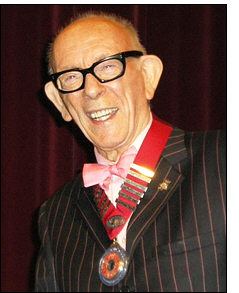 When Ali Bongo stood for office last year as president of The Magic Circle, a small handful of people within the famous magical society questioned whether such a prestigious organisation ought to have a president with such a silly name. They couldn't have been more wrong. To thousands of magicians, to just about every other kind of entertainer the world over and to millions of members of the public, "Ali Bongo" was as certain a passport to magic as "Abracadabra".

Long before Bongo was overwhelmingly elected, he was universally regarded as The Magic Circle's unofficial international ambassador as well as one of magic's wisest and most knowledgeable elder statesmen. That reputation was born out of a career in which he was not only a superb comedy magician in his own right – his crazy Arabian Nights persona, the Shriek of Araby, performed a non-stop cavalcade of tricks and anarchic zaniness – but also the genius inventor behind the tricks and illusions performed, to huge success, by two of the 20th century's leading television magicians, David Nixon and Paul Daniels.

Ali Bongo was born William Oliver Wallace in 1929, the first child of William Wallace and his wife, Lillian, in Bangalore, India. His father was a Sergeant Major with the 1st Battalion of the Queen's Own Royal West Kent Regiment. Growing up on a British station in Trimulgherry, Secunderabad meant that his first words were in Tamil, the language of his ayah (nanny). India made a powerful impact – for the rest of his life he could summon up the colours, aromas, music and characters of his childhood. These influences clearly inspired his great love of costume – not just the Shriek of Araby's Chu Chin Chow-inspired curly-toed slippers and turban-fez – but also his colourful suits and star-spangled jackets.

His first exposure to magic came in the form of street performers and a magician who visited his school and threw a goblet filled with ink at the lady teacher, the contents of which turned into dew-covered flower petals. Once he had learned to read, he taught himself tricks from the children's column in The Times of India.


Bongo came to Britain with his mother when he was seven. After his father had ended his army service, the family moved to Sutton Valence, near Maidstone, Kent. He was soon buying tricks from magic catalogues, the seeds of a collection that would become so large that, years later, he would have to buy a second flat to house his props and inventions.

At Sutton Valence School he started a magic club and wrote and illustrated his own magazine. Leaving school at 16, he eschewed his parents' ambitions for him to become a doctor, and passed the two years before his National Service by doing children's shows at three guineas a time.

He became a founding member of the Medway Magical Society and joined a youth club where he took part in a pantomime that saw the creation of "Ali Bongo". The character, a ship's cook, wore a costume derived from a fantastical amalgam of oriental influences (including his mother's kimono) and sang a song which began: "My name is Ali Bongo and I come from Pongo, pong-tiddley-pongo land." He had discovered, as he later put it, that he could "get laughs by being crazy." Bongo would win many prizes and receive numerous awards, but he never forgot his first triumph, winning a 5/- Savings Stamp as third prize in a talent competition, which he promptly lost through a crack in the stage.

While serving with the Pay Corps, Bongo wrote and performed troop shows for NAAFI. His family moved to London and when he was demobbed he started working for Harry Stanley's Unique Magic Studio, where he honed his skills and met many professional magicians, including occasional celebrities such as Orson Welles.

Bongo later became the manager of the magic department of Hamleys toy shop in Regent Street. He had refined his Shriek of Araby routine, abandoning his original patter in favour of a comic pantomime performed at breakneck speed to the music of Albert Ketèlbey's "In a Persian Market". He took time out to join a touring company in Germany and eventually had to choose between Hamleys and becoming a full-time professional performer. He took the latter course and after an unsuccessful attempt at being a tuxedoed magician in Soho nightclubs – Billy Wallace with Magic Moments – he returned to Ali Bongo and a career as a comedy magician.

Bongo made his British television debut in 1965 on The Good Old Days. Five years later, he began his long association with David Nixon. Bongo chose and often created all the tricks and illusions for 85 shows, often appearing as "Alistair", Nixon's "idiot assistant", dressed first as a bewigged flunky and, later, as a butler. While Nixon joked that Alistair was "about as useful as an ashtray on a motorbike," his presence on stage was a guarantee that the magic actually worked.

Nixon's successor as TV's magician was Paul Daniels and Bongo was invited to join the team responsible for creating television's most successful magic show that ran for 15 years. Allegedly, Daniels was initially wary of Bongo's involvement, fearing that he was too aligned to the old school style magic of David Nixon, but his contribution to the shows proved his worth, using his knowledge of magic and his innate ingenuity to crack magical dilemmas on the spur of the moment.


Bongo's TV appearances in his own right included the children's programmes Zokko and Rainbow as well as his Ali Bongo's Cartoon Carnival. He also became magical adviser on such TV shows as Ace of Wands and Doctor Who, beginning what would become a major part of his career, training actors, opera singers and ballet dancers who were required to execute magic in their performances.


While working on an episode of One Foot in the Grave, Bongo met the writer David Renwick, who later created Jonathan Creek, the magician's assistant and amateur sleuth. According to Renwick, Creek's character (played by Alan Davies) was inspired by Bongo's skills at lateral thinking and problem solving. Bongo became magical adviser to the series.

Having learned his craft in the dying days of British variety, Bongo loved all forms of stage entertainment and was an active member of many organisations and societies including the Concert Artistes' Association, the International Brotherhood of Magicians and The Magic Circle, which he joined in 1960 – within two years he had been made a member of the Inner Magic Circle. He won The Magic Circle Magician of the Year in 1972, the Carlton Comedy Award in 1983 and the David Berglas Award in 1991. He served twice as vice-president of The Magic Circle before being elected president.

Bongo was a regular participant as compere, lecturer and competition judge at magic conventions, and contributed to the furtherance of magic in many ways: through books and articles (often with his own illustrations) and through his involvement with The Magic Circle's Young Magicians' Club, where he helped inspire and encourage what will become the next generation of magical entertainers.

Privately shy, wonderfully extrovert in performance, Ali Bongo never married but he is survived by a much-loved niece and nephew and by an international family of performers who benefited from his good humour, enthusiasm and generosity of spirit.

Reproduced with kind permission of Brian Sibley, first published by The Independent on Wednesday, 11th March 2009