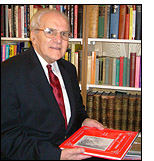 Type “Arthur Setterington” into the Google search engine on your computer internet browser and you will be directed to many pages of sites with references to Arthur, including the acknowledgement that he was the originator of the Penetrating Rubber Bands, the genesis of many of the modern elastic band tricks.

Arthur was prolific in his creation of tricks and ideas, he had over one-thousand effects published in many magazines beginning with Abra in 1947. His published books, pamphlets and manuscripts include The Book of Magic (co-authored with Eddie Dawes), The Life and Times of the Great Lafayette, Off Beat Mentalism, Joe Smith Mysteries, Straight Line Mysteries, Magic, Fun and Games and many more. Arthur’s two books on mental and psychological mysteries, The Power of Persuasion and The Power of Perception, ahead of their time when published over thirty years ago, and now back in fashion, have been published, with additional material, by Paul Hallas under the title Arthur Setterington’s Strange Powers.

In November 2003 Arthur was awarded the J N Maskelyne Literary Award by The Magic Circle.

Cube in a Tube, marketed by Edwin Hooper’s Supreme Magic Company, was one of many originations that Arthur won the Hull Magicians’ Circle Jasper Maskelyne Silver Wand for Originality with and he received one, of many, Linking Ring Awards for his idea. No one has beaten his record for winning the Maskelyne Wand or the trophy for Close-up magic at Hull Magicians’ Circle. Arthur was, off stage, a quiet man who did not exploit financially many of his magical ideas. He was quite content that his trick had been published or manufactured and that would give him great pleasure. I was with him and remember when he handed a batch of tricks for publication over to a dealer – who said, “… if you won’t accept money, pick anything on the stand”, Arthur, typically, chose a modest, inexpensive close-up item and was delighted with it.

Arthur was born in Hull (March 22 1924). Little did his parents, Jim and Hilda, suspect that their first born – Thomas Arthur Setterington would turn out to be known throughout the magical world as a prolific inventor, writer, historian, collector, lecturer, Punch Professor and a performer.

He was a Member of The Inner Magic Circle with Gold Star. Arthur was the longest serving member of Hull Magicians’ Circle; in November 2005 he celebrated sixty-years continuous membership. He was an Hon Vice-President of the Circle and had been Hon. Secretary and President.

His magical interests were stimulated by seeing a magician when he was four years old. By the time he was seven he had, by collecting cocoa tokens, acquired a book of tricks and was given the proverbial magic set – an Ernest Sewell Box of Tricks. After leaving school Arthur’s career progressed from errand boy to ironmonger’s shop assistant to assistant cinema projectionist. Drafted to work in the Cornish tin mines on the outbreak of WWII Arthur’s health suffered and in 1944 he had to leave the mines.

1945 was a magical year in many ways for Arthur – he joined Hull Magicians’ Circle and presented his first professional show, at the City Hotel – fee 2/6d (12.5p). Arthur attended the early British Ring Conventions (winning the originality prize in 1949) and the Abra Jamboree in Birmingham. 2005 was the first British Ring convention that Arthur had missed.

At a show for the Salvation Army in 1948 Arthur met Elsie Kirby and asked for her hand – not in marriage, that came later, but to participate in a Wrist Chopper trick, ask Elsie to show you the dent in the bracelet! 1953 was another landmark year; Arthur was the first winner of the newly awarded Hull Circle Connolly Shield for Stage Magic and, now Elsie had forgiven him for the Wrist Chopper routine, they got married and so Arthur has been assisted and supported by Elsie ever since – they celebrated their Golden Wedding in 2003.

Arthur was by now a very busy entertainer and at Christmas and on special occasions like Coronation Day they performed up to six shows a day dashing from one to the other. Punch and Judy and ventriloquism were just two of the allied arts that Arthur developed commercial acts with.

In 1958 Arthur became a Methodist Lay Preacher and with Elsie devoted much of their lives to work for their church especially with young people as Sunday School and Youth Group leaders. Arthur’s annual Jimmy Jumbo Show at the Library Theatre raised many hundreds of pounds for the Sunday School movement.

Arthur’s interest and generosity in assisting young magicians continued throughout his life, Arthur played a leading role in the Humberside Young Magicians’ Group, a group that has helped nurture many successful, professional magicians. Recently, on January 5th 2006 Arthur was able to watch the annual competition for the Arthur Setterington Junior Award for Close-up Magic. He presented the trophy to Jack Gleadow, age 11, the winning competitor, right at the beginning of his magical life.

In 1960 Arthur won the Zina Bennett Trophy for close-up magic at the British Ring Convention and he won this national competition again in 1968. 1960 was also the year in which his son Ian was born. Ian who famously exclaimed that he would “…rather spend two weeks in Withernsea than watch the Linking Rings!”, especially when the many magical visitors got in the way of him watching Match of the Day.

Over the years Arthur has lectured to magical societies all over the UK and Ireland and he made a career of talks on magic and related subjects to lay groups - women’s, church and voluntary organisations.

At 81, Arthur had no thought of retirement from magical activities, to the end of his magic-filled life he was still dreaming up tricks and routines, writing up his notes on magicians he watched in Hull’s variety theatres in the 1930s and 40s, lecturing – his last lecture Over the Top! was given to Hull Circle members in November 2005 – and assisting with the Young Magicians’ Group.

On a personal note – I knew Arthur and Elsie since I first came to Hull as a student and I can’t count the many acts of help, friendship and hospitality that I have received from the Setteringtons – and I am not alone, all of Arthur’s friends, and countless magicians and correspondents throughout the world have experienced the same warm generosity always given with no thought of return.

We can’t do better than quote from Eddie Dawes’ Foreword to grandson, Calum Setterington’s (2003) biography of Arthur –

“When I moved from Glasgow to Hull and transferred from the Scottish Conjurers’ Association to Hull Magicians’ Circle the first magician to extend the hand of friendship was one whose name was very familiar to me, although we had never met – it was Arthur Setterington. Over the intervening years we have became very good friends and I had the opportunity to admire first hand his many sterling qualities as an author, lecturer, historian of magic, practising magician, clever inventor of tricks and Methodist Lay Preacher.

Arthur’s ability to devise new tricks was awesome and his contributions to magic literature are an incredible achievement. Add to that the many books he authored and you have a measure of his versatility, clearly recognised by his election to membership of The Inner Magic Circle and recipient of The Magic Circle’s Maskelyne Literary Award.

As a mentor to young aspiring conjurers, Arthur has for many years, shared his unrivalled knowledge with the Young Magicians of Humberside organisation and countless youngsters owe much to his instruction – I only wish that I had been so favoured when I was their age. Of Arthur’s many other attributes, let me say simply that he is a loyal, dependable fellow whom I am privileged to call a friend.”