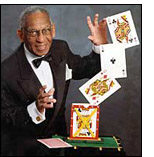 Bunny Neill was born in the Caribbean. He became a magician and escapologist at an early age and was a full time professional for over 40 years. He became the first African Caribbean performer in the UK to receive the prestigious MIMC (Member of the Inner Magic Circle) Gold Star from The Magic Circle.

In 1996 he was resident in Nottingham and rang me to see how he could join The Nottingham Guild of Magicians, saying in his modest way, "I don't suppose you know me." I certainly did and to his surprise rattled off which tricks he performed, to great acclaim, in two Magic Circle shows in the mid 60's. I'd even remembered he didn't use the usual magician's table but carried all his props in a net bag affixed to the microphone stand. All the reviews of these shows he'd lost in a flood in Jamaica but I was able to furnish him with photocopies via a magician friend. He joined the Guild in 1996 and delivered an exciting, quite deep lecture, with the accent on the psychology of performing, in lieu of an audition. He was made an Hon Life Member in 2004.

Bunny worked all over the world. He played the London Palladium in 1968 with Sammy Davis Jnr. topping the Bill. His feature tricks were always: The Cut & Restored Rope, Torn & Restored Newspaper, The Nemo Rising Cards and the Razor Blades From The Mouth. The latter never failed to startle as having swallowed sharp blades at the beginning of his act, some 30 to 40 appeared all strung along a line of thread at the end of the act! During an underwater escape in St. Helier, Jersey he nearly drowned, banging his head badly inside the sealed box. However true to the spirit of Houdini, he escaped and the publicity was huge.

In his latter years he became a Governor of his son's school, a hypnotic therapist, and a children's entertainer working as The Magical Storyteller. All magicians, and the public, everywhere, loved Bunny. He died aged 74 on Sunday 7th May 2006 of pancreatic cancer. He was a kind, gentle, considerate man, with time for everyone and a vast knowledge of Magic. Described by one performer as "A Friend To Everybody" ; a fitting epitaph we offer with his loving wife Nikki, his son Oscar, and his daughter Jessica.