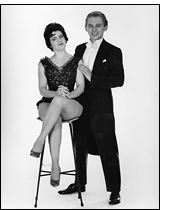 
From humbled beginnings mum along with my dad had a long and successful show business career, she met and started working with my father in the 1950s as The Amazing Yoxanis, before their name was changed to Fred Van Buren & Greta in 1961.

Mum often joked that “it was love at first sight” – “but I think Fred could see I was the right size to fit in the boxes”!

From presenting their themed magic act ‘Mystic Baggage’ in circus, then catching the end of the heyday of Variety and Music Hall they went on to appear on television numerous times, including repeatedly with David Nixon, (my parents being the first to appear on TV presenting the Multiplying Bottles in 1960). They lead the way through the 1950s and 1960s with their new version of the Substitution Trunk, which at the time was considered “the fastest ever” with mum’s lightning speed “box jumping ability” and dynamic presentation - according to past president of the Magic Circle, Alan Shaxon it was my parents who introduced the hoop of material and popularised the Sub trunk effect making the transition from a screen to the canopy for surrounded performance. Other illusions that they invented, built and performed were reported in the press as “21st Century Miracles” include the unique Van Buren’s Vanishing Motorbike & Rider Surrounded – (performed for the first time ever at the Collegiate Theatre for the Magic Circle in 1976), The Fluorescent Light Tube Penetration, Sub Trunk to Flower Garden Finale, Temple of Life and The Creation amongst many, many others.

Their massive success on the London Banquette scene and creative minds mixed with ability to build, brought them to the attention of Walt Disney who they worked for in Wembley Arena as part of Tom Arnold and Walt Disney’s Snow White on Ice before going on to tour the show the following year.

They went on to top the bill on numerous shows, with more TV appearances and touring their own full large scale illusion shows around the world, with a team of dancer assistants and regularly employing other acts to appear in their shows. They were invited to appear in the Grand Place Brussels presenting their Vanishing Motorbike Illusion with mum vanishing along with the motorbike as part of the FISM World Congress of Magic Convention in 1979, at a leggy 5 foot 2 inch height - mum made a formidable ‘biker’.

Quite often the role of the magicians assistant is wrongly overlooked and underestimated, mum was a master of the art, years of experience taught her that when she needed to draw attention she did with class and style, when she needed to fade into the background she could become almost invisible, but always her presence was there, never missing a beat, organising the other girls and stage crew, props never late, always moved and stored she had the eye for detail and professionalism.

Slowing off from performing briefly in the 1980s - to make sure that I went to school between my own performances and when I wasn’t allowed to tour with my parents, mum concentrated on running their Newcastle-under-Lyme, Staffordshire based Hardware / DIY store business, which included mum carrying and cutting large 8 x 4 whole sheets of glass and timber for the customers.

Mum had so many skills and could turn her hand to almost anything with a professional touch, from how to “Box Jump” to cooking, wallpapering and towing trailers.

Early retirement was short lived however as when dad had just finished filming the movie The Helen Keller Story and joined Chipperfield’s Circus he suffered a heart attack, but the show must go on so mum stepped in to take over the role reversal of presenting the act as the Illusionist, with the assistants and myself in support.

Mum went on to front the illusion act on other occasions including in Gandeys Circus whilst dad and I toured the second unit of the Van Buren show.

Through the 1990s mum and dad both slowed off but continued to “cherry pick” their shows whilst I toured my own separate act and show. Mum amazingly even at official retirement age could vanish with that motorbike.

Their last official show was in 1996 but both mum and dads involvement continued, with mum cleaning up the workshops when dad and I were making the illusions, as well as maintaining their household, regularly stepping in to run my office & always there with her advice, not only for me, but for so many others too. Always with a sympathetic ear for others and she was never, ever, without her trusty camera to record magic moments.

In 2014 The Circus Friends Association presented mum and dad with The Circus Lifetime Achievement Award.

In 2017 during the Blackpool Magic Convention both mum and dad were presented the Neville King Lifetime Achievement Award in front of the packed 3000 seating Opera House theatre of cheering magicians and a standing ovation.

Then in 2019 both mum & dad were honoured by being awarded the Freedom of the Borough of Newcastle-under-Lyme for their lifetime in showiness and contribution to raising awareness of the Circus Creator Philip Astley.

Some of mum and dad’s life and achievements were recorded onto the Van Buren Story Documentary and in more recent years mum became the loving “nanny” and regular babysitter of my and Allyson’s daughter Harley, as well as juggling an active social life with her many friends. On mums last day she watched Harley in her dance class and offered as always quiet words of encouragement and supportive advice.

After a short illness mum seemed to be recovering well, but then suddenly in the very early morning of Sunday 5th July 2020 mum’s massive loving heart stopped.

In performance mum ruled the stage with her dynamic style, off stage however she was happy to quietly step back with the shy, quiet, unassuming, flip side of her amazing personality.

In the few days since mums passing the messages of condolence have neared a thousand so far. Amongst the many stories being recounted everybody says the same words about mum, “she was a beautiful person”, “never a bad word about anybody”, “A great sense of humour”, “always smiling”, “Kind”, “Humble”, “generous”, “loving”, “quietly giving”, the beautiful quiet backbone of the family.

For my beautiful mum’s short stature, she was actually a giant of a person who has now left a massive hole in a great many lives.