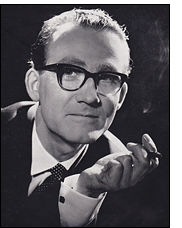 Born in Bradford on 21st May 1935, David soon came under the influence of Ken Brooke, who advised him to ’always be yourself’ and to go to Landseer’s in London to have some good publicity photographs taken. One of these, showing a suave David with the smoke from his cigar curling upwards in a mystical fashion, was on the front of How to Ensure a Full Date Book – one of the first books I optimistically purchased. David’s favourite photograph of himself, though, was as a toddler. Noting he had his fingers crossed, he commented: “I can’t recall whether I was wishing for luck or about to tell a lie.”

David’s picture on the front of his Comedy Profile book has a blurred version on the back, using a sight gag originated by Clarke ‘Senator’ Crandall. Having a drink with friends, David would casually turn over the book, unobserved, and remark: “My, this beer is strong!”

David was also the subject of a cartoon by Ali Bongo, and Dennis Patten adapted a sketch of him hard at work at his desk for the Magic Info magazine.

David created and constructed many large-scale illusions under the banner of Designer Magic. When given the brief by the Mystique show in Blackpool to provide ‘a prop to vanish the entire cast of fifteen instantaneously, that will let us see all round, behind, over and under’, he came up with The Final Vanish. The show opened in 1988 and ran for ten years with this same closing effect, notching up 5,000 performances and making it the most used illusion in the UK. Smaller magic included his trademark Road Signs routine, which he manufactured and performed regularly. David once confided that the only card he ever forced during his whole career was the six of diamonds – which meant he never forgot it!

David advised on popular television programmes such as Lost Empires and the Jeremy Beadle Box of Tricks series, famously making a railway carriage disappear as it passed through a tunnel.

As well as being a prolific writer, David lectured extensively, producing with International Magic the highly acclaimed DVDs An Audience with David Hemingway, An Audience Against David Hemingway and The Magic Fly on the Wall, along with his old friend and sparring partner Donald Bevan. Many viewers, including Paul Daniels, reported that once they had begun to watch, they were unable to tear themselves away.

David had been in The Magic Circle for over forty years as well as being a member of the Northern Magic Circle. He had a life-long association with the British Ring of the International Brotherhood of Magicians, receiving a certificate in recognition of his length of service. For many years he reported on the annual convention for The Budget. His observations were down-to-earth and honest, but criticism was always combined with constructive comment and sound advice. He was determined to reject the blandness often associated with reviews in magic magazines. Typical of his style, tempered with wry humour, was: "Well, it was a show and it was the first event, so I suppose it must be called the Opening Show. I always go to it, whether I need the sleep or not."

David was also a proficient lecturer, touring with Aspects of Magic in the ‘80s, Designs on Magic in the ‘90s, and subsequently the Slices of Gingerbread lecture. This was based largely upon his book Working with Genius, describing the experience of working with top performers such as Tommy Cooper, for whom he made many unique comedy props.

A decade ago, I persuaded David to join my local magic cub, the Modern Mystic League, which he continued to support by regularly attending meetings and events, writing for the magazine and contributing to the lecture programme. He insisted upon compering the cabaret at my British Ring President’s dinner in 2019, which was probably his last public appearance. He excelled in this role, compering many shows to support Great Ormond Street Hospital and having run his own ‘People Are Lucky’ quiz show for twelve Christmas seasons at the leading hotels in Blackpool and Southport.

John Fisher said of him: "David represents a rare breed amongst magicians, in that his knowledge and expertise embrace a grasp of all things mechanical, together with a true understanding of the psychology of audiences. His style is as readable as his ideas are practical. It is as if someone like Jack Hughes or Gil Leaney had been crossed with the likes of Al Koran or Billy McComb."

Above all, David was an engaging performer and a courteous gentleman. He passed away on 1st February, predeceased by Marjorie, his wife of over fifty years. There is no remaining family.