Derren Brown on The Heist 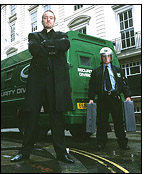 Under the guise of a motivational seminar and a follow-up documentary, can Derren Brown persuade any of his group of responsible, middle-management businessmen and women to steal £100,000 in an armed robbery? Such is the premise for the most ambitious and challenging of Derren’s specials to date. It’s a look at what little it takes to cross into deviant behaviour and a masterclass in persuasion.

Derren, how did you come up with the idea for this show?
“As ever, these things come about by thinking what I'd personally like to see on TV. I'm finally having my TV removed and replaced by a tropical fish tank, which I hope will provide more interesting viewing. I've also always had a vague distaste for the cult of selfishness apotheosised through self-help seminars, which form the starting point for the show.”

How would you describe what it’s about?
“For me this is about the fine line that we tread between normal and deviant behaviour; the nature and process of persuasion; what little it takes to push us into behaviour that is designated anti-social; and to quote Banksy - the fact that more crimes are committed in the name of obedience than disobedience. And generally far worse crimes.”

Is it possible to get someone to obey ANY order? Are they hypnotised?
“You have to realise that hypnosis doesn't exist: it just works on people's natural suggestibility, their expectations and capacity to unconsciously role play. You can't make someone do anything they don't want to do. Clearly if a hypnotist could make someone to steal £100k just by telling them to, the world would be a different place, and I suspect that hypnotists wouldn't bother doing shows in pubs or dodgy Spanish holiday resorts. So the challenge of the show is to insiduously massage these people to the point that they will make the decision themselves to hold up an armoured security van and point a gun at the guard, but without ever telling them to do so. Were I to ever suggest the idea, they'd obviously refuse. It has to come from inside them at the right moment. The viewer will follow every aspect of the persuasion process that takes place over 2 weeks: nothing is added or taken away.”

Were they aware they would be breaking the law?
“Absolutely. When the moment arrives, they will have no idea that they're being filmed, or that we're using a stunt actor as a security guard.”

Will they remember what they did?
“Of course. For that reason, the psychological handling of the participants was of paramount importance. Aside from the police we had sealing off and monitoring the area, we also used two independent clinical psychologists in the show to check on their suitability beforehand, and welfare after.”

DERREN BROWN: THE HEIST is an Objective Production for Channel 4, produced by Simon Mills and directed by Ben Caron. Executive producers are Andrew O’Connor, Derren Brown and Anthony Owen.