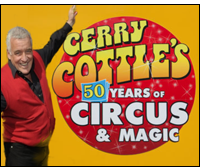 Gerry Cottle embodied the mythical ‘boy who ran away to join the circus’, confounding his stockbroker father’s assertion it was a passing teenage fad when, aged 16 he absconded from the private school at which he was educated to revel in the sawdust. In 2012 he celebrated fifty years in the business: some passing fad.


Gerry’s lifelong passion was ignited by a visit, aged 8, to Jack Hilton’s Circus at Earls Court; a subsequent trip to Bertram Mills Circus gave him his love of magic, after seeing Ferry Frost, illusionist, and Borra the King of Pickpockets.


In the ensuing years he went on to realise his dream of owning the largest circus in the UK, acknowledged as one of the world’s great showmen. Gerry yo-yoed from millionaire to bankrupt and back, in the roller-coaster world of circus economics, as he revealed in his biography, ‘Confessions Of A Showman’. An unputdownable read, this paints a brutally candid picture of a lifelong entrepreneur, wheeler-dealer, showman and fixer. In true circus tradition Gerry was a family man right to the end of his colourful life. At the same time he cheerfully admits to having been encumbered with an addictive personality, with a twinkling eye for the ladies and, for 13 years, a prodigious appetite for Class A drugs.


He embraced his destiny by opening his own circus in July 1970, with just five performers including himself and wife Betty. From his start as an apprentice he went on to own three of the major touring circuses in the UK: the Cottle & Austen, the Moscow State and the Chinese State Circuses. Like all circus folk he dug drains, erected and dismantled tents, repaired diesel lorries, emptied latrines, sold tickets, fried hot dogs, created publicity, acted as bouncer, did deals, and drove those lorries all around the world.


Eyeing with alarm the growing outcry against animals in circuses, Gerry continued to wage a lifelong PR campaign for the recognition of circus as an art form, an accolade denied to British circus, compared to its standing across continental Europe. He now faced the creative challenge that has preoccupied the latter part of his career – reinventing Circus without animals. He started with ‘The Rainbow Circus’ featuring his three daughters as ‘The Cottle Sisters’, followed by ‘The Rock & Roll Circus’. He then achieved longevity with ‘The Circus of Horrors’ (in partnership with John Haze) in 1995, a gothic-themed dramatic show. Employing stunt acts, acrobats, magicians and clowns, Gerry set out on a tour of the Far East that proved immensely lucrative, followed by a tour of Iran that led to his bankruptcy.


Since then he has taken a succession of themed Circus Magic shows on the road: ‘The Turbo Show’, featuring an ebullient 50 acts in 100 minutes; ‘The WOW Show’ that morphed into ‘The Magic Circus’.


Ever the entrepreneur, shrewdly spotting the dwindling outlook for circus, in 2004 he sold all his circus interests and bought the tourist attraction Wookey Hole in Somerset, where he lived with his family to the end of his days: his wife of 50 years, Betty, four grown-up children, five grandchildren and one great-granddaughter – another family business.


He was particularly proud of the Circus School he created at Wookey Hole, which took in youngsters from local schools in Somerset and taught them circus and magic skills, which they showed off to great effect in the twice-daily daytime shows at Wookey Hole for the visitors. The School produced several acts who went on to become pro circus artists.


A lifelong collector of illusions, the prop store at Wookey hole was a veritable Aladdin’s Cave, with over 30 illusions in store, as well as a trunk full of props. He started off getting illusions from Derek Devro, as well as from Simon Drake, George Kovari, Tim Clothier, Mike Michaels, Bill Smith, Cliff Bradley and The Twins FX. An ardent convention-goer he rarely missed Blackpool, and was often to be espied at MagicLive! and the Genii convention, where he made a lot of magical friends. In 2017 he gave an unforgettable lecture in TMC’s theatre, in which he lifted the curtain on his life and his love of magic illusions; he subsequently graced the cover of The Magic Circular in June 2018 along with a frank and revealing interview. It was entirely fitting that in 2018 The Magic Circle conferred Gerry with honorary life membership in recognition of his contribution to magic and the allied arts – an accolade he was inordinately proud of.


Having triumphed over an earlier fight with cancer, Gerry was cruelly taken from us on 13 January 2021 – another alarming statistic of the pandemic. A teddy bear of a figure, despite his stance as a tough wheeler-dealer, the Gerry Cottle I was fortunate to know was a larger-than-life yet gentle man, honest about his flaws, considerate and always splendid company as he shared his lifetime of fascinating anecdotes.