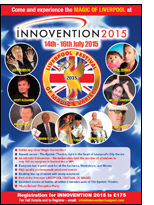 The INNOVENTION only takes place every few years normally to celebrate a special occasion or event. In the past in Las Vegas in 2010 it was produced to honour Siegfried & Roy, and in 2012 to honour Peter Reveen. The INNOVENTION in 2015 is happening 'across the pond' in Liverpool, a city which has a special magic of its own and the INNOVENTION will be a big part of the first ever 'LIVERPOOL FESTIVAL OF MAGIC & VARIETY'.

The INNOVENTION has many unique features. Firstly at both the previous INNOVENTION Conventions we deliberately limited the number of attendees so that everyone who registered was treated like a VIP. This will be the same in Liverpool in July 2015, and we are limiting the number of registrations to just 100.

For those attending this will be a very intimate event at a high class venue with a stellar line-up of talent, including without doubt one of the greatest and most commercial comedy magicians in the world JEFF HOBSON, who is currently starring in the ILLUSIONISTS TOURING SHOW which is appearing around the globe.

MICHAEL GOUDEAU was the Guest Star for over 20 years in Lance Burton's fabulous Las Vegas Spectacular Show at the Hacienda and Monte Carlo Hotel & Casinos. Apart from being an outstanding comedy performer, Michael has also been nominated for several Emmy Awards for writing Penn & Teller's very successful 'Bullshit' TV Show. This will be Michael's debut at any British Magic Convention.

SCOTT ALEXANDER is one of America's top 'working' professionals. He constantly appears on cruise ships and in corporate shows and he is well known in the world of magic together with Bob Kohler for developing innovative magic routines and designing props for the 'working performer'. This will also be Scott's first ever appearance at a UK Convention.

JOHN FEALEY
One of the best kept secrets in magic, John Fealey is a long time professional magician and comedy performer who has starred for many years in the prestigious 'Palazzo' Shows across Europe. John is an extremely talented performer who is rarely seen at any Magic Convention.

BOB KOHLER
Most people in Magic know Bob Kohler as primarily a Magic Dealer based in Las Vegas, but Bob is much more than that! A successful musician and then one the USA's busiest commercial magicians, Bob is a top class Close-up and Parlour performer. Bob did appear on one previous occasion over 15 years ago at a Magic Convention in London, but otherwise has not been seen in UK.

PAUL ZERDIN
A 5 time ROYAL VARIETY SHOW performer, Paul is arguably the most commercial ventriloquist in the world. Constantly busy working across the globe, Paul will not only appear in the Gala Stage Show, but he will also conduct a Q&A session and talk about what it takes to become a successful performer.

GRAHAM P. JOLLEY
Graham has been one of the busiest and most successful professional magicians in the Uk for many years. Although he has appeared at British Magic Conventions before, at the INNOVENTION Graham will be talking about his performing experiences and how he has had to adapt to compete in today's marketplace.

MARK RAFFLES
An absolute legend ... now 96 years old but still very much on the ball! No-one knows better than Mark what it takes to move with the times and survive in the world of entertainment.

WAYNE DOBSON
A true 'Star of Magic', Wayne is as enthusiastic as ever, in spite of the testing challenges he has to face in his day to day life. A terrific magician with a sharp sense of humour.

PAUL STONE
A Tradeshow performer and Show Producer in both UK and Las Vegas for over 40 years, Paul has specialised in producing Charity Fundraising Shows and Events, including more than 20 shows at the world famous London Palladium Theatre, for several of which he has been the MC. Paul will be the host for the INNOVENTION.

The INNOVENTION runs from Tuesday morning 14th July until late night on Thursday 16th July. There will be a Night Before Party / Reception on Monday 13th July from 8pm until 11pm. Registration is limited to 100 people. The cost until 31st March, subject to availability, is £175. To register, send an email to info@innoventionliverpool.com

What makes the INNOVENTION and LFMV different to other Conventions?

The INNOVENTION Convention is different from other Conventions for several reasons. Firstly we deliberately limit the number of attendees to just 100 people so that everyone is treated like a VIP and has unrivalled access to the performers. The venues that we have chosen for the INNOVENTION are the unique Beatles Themed 'Hard Days Night' Hotel, and the beautifully refurbished Epstein Theatre, both right in the heart of Liverpool's City Centre. The Hard Day's Night Hotel is a very upmarket hotel located literally just around the corner from the world renowned 'Cavern Club' where the Beatles started out their sensational careers.

Several of the Headliners at the INNOVENTION have not appeared at a UK Magic Convention before, and JEFF HOBSON will only be appearing at one Convention in 2015 ... the INNOVENTION. The experience of the Headliners at the INNOVENTION is unmatched! Both Jeff Hobson and Michael Goudeau have each performed over 10,000 shows in Las Vegas, and Paul Zerdin has appeared in no fewer than 5 Royal Command performances. All the other performers also have thousands of shows to their names in shows around the world. So the main difference to other Conventions is that every session will feature the very best 'working performers' with huge experience and knowledge.

Why choose Liverpool? What does it have to offer?

I wanted to produce an INNOVENTION Convention in UK and there are a couple of reasons I chose Liverpool. It is my home City and ever since it became the European Capital of Culture in 2008, the city has blossomed into one the greatest and friendliest cities in England. The INNOVENTION will be at the 'Hard Days Night Hotel' which is literally a five minute walk from the outstanding new 'Liverpool ONE' shopping Centre which is fantastic and has every major store and many great restaurants. also the high quality Albert Dock Riverside area has become one of the most popular tourist attractions with cafes, restaurants, the 'Beatles Experience', 'Tate Modern' Museum, Maritime Museum and the new Liverpool Museum, all within a few minutes walk.

How many Dealers will you have?

Here again, the INNOVENTION is different from other Conventions. We carefully choose the performers who appear at the Convention and prefer to give them the opportunity to sell their products at the end of their sessions. We are still in the process of talking to another featured performer, still to be announced, who is also a Dealer. Rest assured there will be some excellent magic to buy at the INNOVENTION, mainly aimed at 'working performers'.

What will the format be ( ie Lectures, Seminars, Workshops ) ?

We are keeping the exact format and sessions at the INNOVENTION to ourselves until the Convention. Suffice it to say that they will be different to any other Convention. We won't have the usual Lectures, but all the sessions are geared up to covering everything that a magician or variety performer needs to know to be able to go out and perform a successful show, whether on stage or Close up. Each of the Headline performers has been chosen because of their experience and performing knowledge, and as a result everyone attending will see some great magic and have a genuine opportunity to improve their shows. The Gala Show will be very fast moving, entertaining and professionally produced.