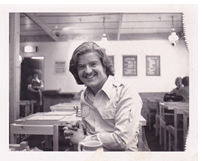 Johnny Hart, who has died aged 75, was a true overnight success. His big break came in 1961 when he entered, and won, the first Young Magician of the Year competition, organised by The Magic Circle.

That was just the start and Johnny Hart, under Harry Stanley’s guidance, toured the world’s most prestigious venues, appearing regularly as a guest act on British television, and including several times on the Ed Sullivan Show in America. During the 1960s and ‘70s, Johnny worked with the biggest stars of the day including the Bachelors, Mike and Bernie Winters, Danny La Rue, Max Bygraves, Ken Dodd, Freddie Davies, Dick Emery, Bruce Forsyth and Mike Yarwood.

Inspired by Channing Pollock, who he would later meet and befriend, Johnny had lengthy engagements at the Pigalle in London, the Paris Lido, the Casino du Liban in Lebanon, The Dunes, Las Vegas and in Reno. Johnny worked with The Beatles and had a season in the Bahamas when he took over the Richiardi Show. As well as entertaining the public Johnny was very popular at magic conventions, where he performed his award-winning act at gatherings all over the world.

A few days before Johnny passed away, he was given the news that he was to receive The Masters Fellowship from The Magic Castle. This is their highest award and is given only to master magicians. Past winners include Cardini, Slydini, Marvyn Roy, Channing Pollock, Norm Nielsen, Paul Daniels, and last year, David Copperfield.

Johnny will be much missed by his step-sister, Irene, and niece Debbie, and also the many magicians worldwide who were inspired by Johnny’s amazing talent.

His marriage to Lorna, who was also his stage assistant, ended in divorce. Together they had three sons and a daughter.

To quote from the late Alan Shaxon "Johnny Hart is for me the best and most charismatic manipulator in the world."