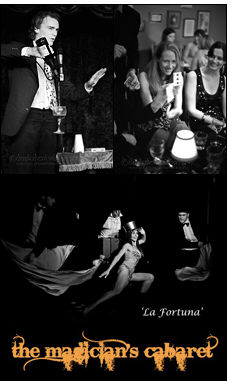 There's good reason why Australia’s famous magic venue, The Magicians Cabaret, has been subject to so many rave reviews lately. Amongst its stellar cast of three magicians, vocalists and a parade of dancers, there is an English gentlemen and magician.

The scene is set in The Magicians Cabaret resident cabaret show called La Fortuna where three characters test their luck in the original Sin City, Las Vegas, as lady luck weaves her little plots around them. Max Rendall born in Chelsea, London, plays a character called Milledge, known as the Gambler. In Vegas for a three day odyssey, flying too close to the sun when as if by magic he encounters lady luck, giving him the ability to control the cards, and the outcome. The show is as spellbinding and mesmerising as it is riveting, and Max Rendall delivers in his role. Simplicity and sophistication are fascinatingly twinned in Rendall’s performance as he puts his own spell over the audience.

It's all about tradition, Paul Daniels, Derren Brown, Dynamo. There's a lovely attentiveness to the audiences’ reactions which all us English magicians have.

It was a chance meeting with the show director, former royal ballet of London James Taylor (a native Englishman himself) who introduced Rendall to The Magician’s Cabaret producer James Karp. “Australian audiences love him” says Karp, “he personifies the magic” - It wasn’t always this way though. Rendall found the transition from close up magic to stage magic initially challenging. He needed to sharpen his focus; it was like his mind was on shopping.

After an intense two month training program by The Magicians Guild, a members only magic club that trains magicians in drama, dance and direction, Rendall started finding his tempo, and now exerts attraction. The judicious blend of magic and realism in James Karp’s show allows the magicians to invest their roles with an unusual degree of individuality. Rendall shines with that good old fashioned English charm – moment by moment his magic is smooth and enchanting. Watching Rendall perform his close up was also a delight, not only visually, but just listening to his eloquent control of the English language is enough to leave you in a trance.

Below its magic, there is a warm cabaret family feel to The Magicians Cabaret, fellow resident magician Jackson Aces, who channels an unmissable performance himself, says, “we all work as a team here, we support each other, we have a production meeting and go over the show report every Monday to discuss our angles, delivery of effect etc. to see what could be improved. Rendall adds, “the Karps (James and his wife and co cast member, Simone) are charming hosts and their introduction to The Magicians Guild magic club has helped me develop my skills so I can be a more polished performer.”

Simone elaborates by saying, “Max always had the skill of a magician, but this show is based on story telling with a dash of musical theatre thrown in. When he joined us, Max had an unguarded radiance, we just needed to add stage skills and a bit of armour – Rendall found himself a member of a magic club that specialises in actually training magicians in all different aspects of showmanship. Now, when he performs on stage, he is the epitome of the English gentlemen; polite, humble and a sharp wit to boot.”

Max Rendall’s contract as a resident magician was extended from three months to twelve after producing his own magic parlour show ‘An Intimate Evening of Magic’ which received rave reviews and the Australian audience loved him too.

The Magicians Guild is an enigmatic, members only magic club that fosters the art of magic for magicians and enthusiasts alike. The secrets of magic and magicians showmanship are pooled whilst promoting moral and social virtues and encouraging all to conduct oneself with honesty. Thus honouring the ancient magicians oath of Pure Mente et Corpore Magum - Magician of pure mind and spirit.

Regardless of your age or experience now you have the opportunity to become a member of this elite magic club. Study becoming a magician, its secrets, culture and art form. All members are sworn to the magicians oath to never reveal the secrets of magic.