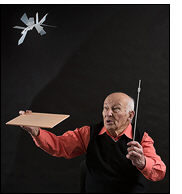 The magical world has lost one of its most prolific originators. Lubor Fiedler died recently at the age of 81.


Lubor was born in Austria but later moved to Vienna and was a chemist by profession, working in a chemical factory. His interest in magic began when he received a beginner's book of magic from his uncle.


Being involved with chemicals and dealing with scientific principles, he cleverly introduced these into most of his brilliant effects, many of which were marketed by himself; some by other dealers.

His output was tremendous, creating mind-boggling tricks such as Gozinta Boxes, Dental Dam Trick, Flying Color Cards, Lubor Die, Red Hot Wire and so many others. Paul Daniels featured a couple of Lubor's effects in his long-running television series on B.B.C.


Lubor also devised numerous trick items for the firm of Tenyo, 'Invisible Zone' being a best seller. He is the author of four books.

I first got to know Lubor during the 1970's and we corresponded with each other over the years. Having been associated with The Supreme Magic Company for 36 years, I had the great pleasure of demonstrating Lubor's effects at out convention stands and later managed to persuade him to lecture at one of the firm's 'Super Day' conventions.


I spent a considerable time with him during the filming of his video, which Supreme manufactured and immediately realised, that he was not just a great magical thinker, but a very accomplished performer and demonstrator.

I personally believe that Lubor Fiedler was the greatest magical originator of the 20th and 21st century.


He leaves behind a daughter, Sarka, a brother, George and a sister.