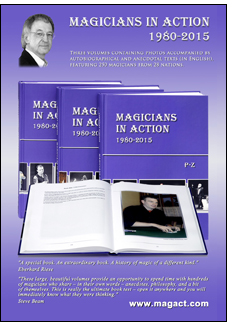 During 35 years, I have visited many national and international magic conventions, lectures, workshops and public performances and have taken photos of magicians from around the world. This never happened with the intention to publish the pictures, but simply to have some souvenirs of the events.


One day, shortly before my retirement, I made the effort to look through the photos and was surprised how many there were. Actually, it would be a shame if they would simply disappear into oblivion. So, the idea arose to publish some of the photos accompanied by personal comments by the depicted magicians. The quality of the pictures varies greatly. Since the majority of the pictures were taken without flash out of consideration for the artists, they are far from perfect. Nevertheless, they have a certain charm.


There was no criterion or restriction for the selection of the artists. The photos which show magicians at different times of their magical careers are on one hand of historical interest, on the other hand, they show many artists who were not in the international headlines, yet through their performances contributed to the promotion of the image of magic as an art.


In 2015 I set out to create crude PDFs of the photos and to contact more than 300 magicians worldwide asking them for a text about their activities in magic. It was a tremendous work. After having secured email addresses from artists in 28 countries I wrote some 350 requests, a myriad of reminders over a period of one and a half year, and some 300 thank-you mails. All in all, some 2000 mails were sent back and forth. In some cases, I had to write as many as a dozen reminders over a period of almost a year and was put off time and again until I finally received the required text. In the meantime – after having upgraded my hardware and software – I scanned and edited all the photos, most of them from negative films, sometimes I only had a paper copy of a photo.


Despite my efforts and pleas, including attempts to make contact via Facebook, I wasn't able to convince everyone to participate. In some instances, communication difficulties or language barriers may have been the reason, but in most cases the interest of the persons in question simply was limited. So, I have to face the fact that great pictures of some fifty famous magicians – including several FISM winners – couldn't be included. But nonetheless, I am very grateful for the cooperation of so many people and for all the contributions I received from all over the world. Without them, the books couldn’t have been realized.


To pay homage to some 30 departed magicians I also included photos and short biographies of them.


Thanks to all who supported me in finding e-mail addresses and establishing contacts. Special thanks go to Roberto Giobbi, Rafael Benatar, Lorenz Schär and Hans-Christian Solka. The latter also provided the translations of a number of Russian texts. A big thank you to Marcel Bühler and his wife Yuko for the translation of my request to Japanese.


Thanks are also due to Oleg Stepanov for his help to establish contact with Russian magicians, and to Andrey Fedorov for his generous help to forward and explain my request to several Russian magicians and to get the approval for the publication of some texts.


Steve Beam did a marvelous job proofreading the complete text. The fact that the texts were written by many authors from different nations, whose first language is not English, didn't make it any easier. Thanks a lot, Steve!


I was born in 1948 in Köniz, a suburb of Bern (Switzerland), the third child of an independent businessman (owner of a toy shop). I attended primary school in Köniz, progymnasium, gymnasium and high school in Bern, where I attained a degree in psychology.


From 1977 through 2013 I worked at the Swiss Council for Accident Prevention. As I held this job on a part-time basis occupying only 70 percent of my time, I had the opportunity to read and practice in my spare time the art of magic, of which I was intrigued since the age of 10. After I had received a magic set from my godfather, I wanted all publicly-available German magic books as birthday and Christmas presents in the following years. When I attended a magic show at the Kursaal in Bern in 1967, in the program I discovered the address of a magic dealer (L' Académie Suisse de Magie, Ch.-E. Sauty). A fantastic new world full of inexplicable miracles opened up to me. A year later, after the visit of the "Grand Festival International de la Magie" at the Kursaal in Bern (where, among others, Siegfried and Roy were performing!), I discovered the address of Alfred Kellerhof (a German magic dealer) from whom I bought Hugard and Braue’s Modern Magic Manual and began to study manipulative magic. In 1969 I visited the "Nacht der tausend Wunder" (Night of 1000 Wonders) in Bern, organized by Werner Hornung. I gave my first performance outside of the family circle at the graduation ceremony for classmates and teachers. The first "real" performance followed with 21 years on the occasion of a wedding feast.


By reading magazines and intensive study of literature I continued my development in magic. End of the seventies I met Almeico (Albert Meier), who had opened a magic shop in Bern. In the following years, I regularly spent Saturday afternoons in Almeico's Magic Studio. At 29, I attended my first magic convention in Montreux (Switzerland). In the late seventies, I twice attended Ron MacMillan's international one-day convention in London, where I met, among others, Juan Tamariz and Aurelio Paviato. In the following years, I attended dozens of conventions in Europe, including eighteen (out of twenty) conventions of The Magic Hands (Manfred Thumm) in Böblingen and Sindelfingen.


In 1978 I published my first book on card magic. In the same year, I became a member of the IBM, in 1979 a member of the Magic Promotion Club, founded in Bern at the initiative of Mickey Delf. During twenty years (1980 to 2000), I held the office of president.


In 1980 I participated for the first time in a contest in card magic in Bonn (Germany). As a complete stranger to the scene, I won the first prize. With the publication of a video tape produced by Sepp Holzer and Heinz Lurz from Munich – at a time when there were hardly any German-language video tapes on the market – I became known as a card magician in the German speaking countries. From 1980, I went to conventions, gave lectures and had several appearances on Swiss TV. Beside card magic I always had a penchant for tricks that were based on dexterity. As a part-time professional I performed magic at a professional level for professional fees, but magic was never my main income.


As the only entrant, I was Swiss Champion of Card Magic on three consecutive championships of the Magischer Ring der Schweiz, MRS (Magic Ring of Switzerland) in 1990, 1993 and 1996.


In over 35 years, I have self-published a dozen booklets and books in German, translated Erdnase's The Expert at the Card Table to German, and released several videos.


From 1995 to 1999, I was the editor of Hocus Pocus, the club magazine of the MRS. In 2000 I was made an honorary member of the MRS and Honorary President of the Magic Promotion Club.