In September 2008, I produced the ‘Tribute to Siegfried & Roy at the London Palladium’ and, as part of that memorable event, we founded MagiCares™ The Magic Charity. Siegfried & Roy and Lynette Chappell became Honorary Trustees.

MagiCares™ has now achieved its official 501 © (3) Charitable status and we have set up an office base in Las Vegas.

MagiCares™ is different from many other Charities in its philosophy and approach. Its main aim is to identify and offer support to smaller, lesser known Charities and to individuals who need a helping hand.

The MagiCares™ slogan is ‘When Magic Cares, Miracles Happen’, and we believe that by reaching out to the Worldwide Magic Community we can make a real difference to the lives of people suffering hardship.

We want to further establish the reputation of MagiCares™ as the Magic Charity so we are proud to announce on Monday 19th September. 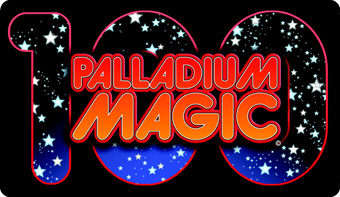 A Night of 100 Magicians


This superb Theatre has recently celebrated its Centenary. Every major Show Business Star has appeared at ‘the Home of Variety’ over the past 100 years, including the world’s greatest magicians.


Produced and Directed by Paul Stone, PALLADIUM MAGIC is a celebration of 100 years of Magic at the world famous London Palladium Theatre. 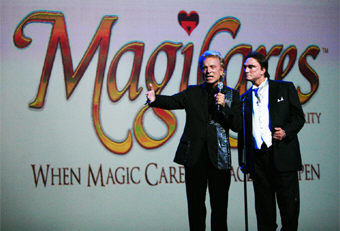 As well as featuring several of today’s top International Magic Stars, (already confirmed are Mac King, Marko Karvo, The Great Tomsoni & Co, and Paul Zenon ), ‘PALLADIUM MAGIC™’ will also pay tribute to many of the Magic ‘Greats’ who have played this wonderful Theatre. 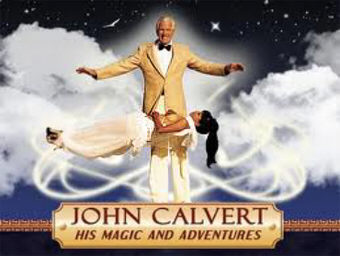 The Show will also include a special tribute to John Calvert, a remarkable Showman, Movie Star and Magician who will have just celebrated his 100th Birthday!


MagiCares™ plans to donate 100 tickets for PALLADIUM MAGIC™ to local Cancer Charities, Hospices, and individuals from the London area, deserving people who will really appreciate a good ‘night out’ and a chance, even for a few hours, to forget their problems.

WE NEED YOUR SUPPORT!

We have put together a spectacular and one-time only offer which will help US to achieve our goal, and give YOU the opportunity of a lifetime!


This is YOUR chance to join a very exclusive and select group of magicians to perform at the London Palladium.


Due to the success of long running Musicals, it is now virtually impossible for any magician to appear at the London Palladium. To see a true Variety Show at the Palladium nowadays is rare, seeing a large scale Magic Show is even rarer.


So, PALLADIUM MAGIC™ offers YOU probably the ONLY chance you will ever have to perform in this famous Theatre.

In recognition of this unique 100 Year Celebration, we are looking for 100 Close-up Magicians to entertain the audience before the Show and during the Interval, and another 100 Magicians to be a part of a ‘fun’ Guinness Book of Records Challenge attempt on stage, to perform 100 Tricks in 100 Seconds!


The potential PR and Publicity value to YOU is priceless!

• YOUR name, photo and contact details will appear in the full colour Souvenir Programme which will be placed on every seat in the Theatre

• YOU will be able to sit in on rehearsals for PALLADIUM MAGIC™ at the London Palladium so you can see for yourself exactly what goes into producing a major Show like this.

• During the Finale of PALLADIUM MAGIC™, in front of a packed audience of 2000 people, alongside many of the world’s best known Magic Stars, YOU will actually walk out to receive your applause on the stage that has played host to virtually every major worldwide Entertainment Star for the last 100 years

• YOU will be a part of Magic History – A Celebration of 100 Years of Magic at the most famous Variety Theatre in the world!

• YOU will receive a Limited Edition PALLADIUM MAGIC™ Polo Shirt

• YOU will receive a DVD copy of PALLADIUM MAGIC™ 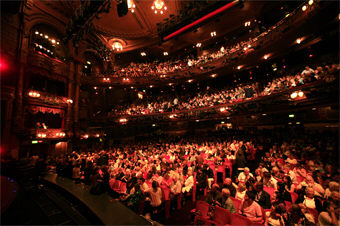 To take part in this unique magical event, we’re asking you to support this MagiCares™ initiative and buy 4 ‘Best’ (£65) Tickets for ‘PALLADIUM MAGIC™’.


This will be the one occasion that your family and friends WILL want to share with you.


All for less than the cost of ONE small newspaper ‘ad’. And YOU will be supporting MagiCares™ and making a real difference to people’s lives.


To register your interest in appearing in PALLADIUM MAGIC™, send a short CV together with a recent high resolution photograph and full contact details, telephone number and email, indicating Close-up or Stage, to producer@palladiummagic.com


The closing date for applications is 25th February 2011. We will inform you shortly afterwards if your application is successful. Payment for the PALLADIUM MAGIC™ Show tickets will be due at that time.


Certain opportunities only come round once in your life
THIS IS ONE OF THEM! DON’T MISS IT!