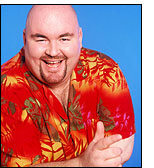 It is with much regret and sadness that I report the passing on the morning of Wednesday December 15th 2004 of Peter McCahon.

A man of many talents and with the prospect of a long career ahead of him, aged only 39 years, Peter has left us far too early. Having trained as a graphic designer and also graduated from Theological College, Peter had been a professional entertainer for over 15 years and devoted a large part of his time to working as a Christian Evangelist. He was an active member of both The Fellowship of Christian Magicians Europe and The Magic Circle. The former of which he was president and the latter, editor of the society's in-house magazine The Magic Circular - last month being awarded the coveted degree of Member of The Inner Magic Circle. However, it was during the last few years that Peter was making his mark as an up-and-coming name in the world of television and magic, having starred in two series of the popular Monkey Magic (Five) and the recent series Magic (BBC2).

Peter was a very dear friend and in the last 18 months I was also privileged to have represented him as his agent. It is not generally known that Peter was also a religious minister, albeit non-practicing; my fiancée and I had asked him if he would marry us on our wedding day in 2005. There was no hesitation and Peter was delighted to have been asked, though he was a little nervous at the prospect of conducting his first marriage ceremony.

Peter was a remarkable, gentle man, who would put aside anything to help a friend in need. And despite his candid 'tell 'em how it is' personality, people instantly warmed to his offbeat sense of humour and of course his trademark Hawiian shirts that were worn come rain or shine. As an entertainer Peter was a seasoned world traveller and as testament to the friendships he formed, he would almost always find a friend with whom he could stay.

On December 9th Peter admitted himself to the East Surrey Hospital with chest pains and was diagnosed with high blood pressure and angina. He was in the process, over the last few days, of having all the usual tests. However, on the evening of Tuesday December 14th Peter complained of further chest pains and was sedated to ease the discomfort. He fell unconscious and during the night suffered several massive heart attacks.

Peter leaves behind hundreds of friends around the world, but closer to home our thoughts and prayers are with his brother, sister, and parents.

Peter you will be dearly missed.