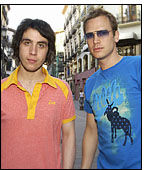 Top magic buddies Pete Firman and Alistair Cook take us on a magical mystery tour of the globe. From Paris to Los Angeles and Vegas, from Buenos Aires to Madrid to New York we follow Pete and Ali’s ‘road trip’ as they meet their heroes of magic, reveal the true stories behind some of the world’s most legendary tricks and attempt to wow the locals with their unique brand of magic entertainment. Sometimes they succeed….

First stop is MADRID where Pete and Ali get close and personal with Mago Migue, a former Spanish pop star who is now a World Champion card magician. They also meet the Woody Allen of Spanish magic, Juan Tamariz, who is a former TV star and film director and are invited to perform to his students at the world-famous Tamariz school of Magic – where a precocious 11 year-old threatens to out perform them. Pete tries to dazzle with a card trick only to discover that the temperature and humidity makes the cards bend and warp. Meanwhile Ali tries to impress with his Spanish but, in his own words: “…when I ordered coffee I kept being served portions of trifle…”

Then it’s across the border to PARIS, where they find out that Gaeton Bloom, France’s answer to Tommy Cooper, is performing at a topless revue bar. They make it their mission to seek him out. Magic and girls - Pete and Ali’s idea of heaven. Not quite so heavenly is Pete’s reception at Le Double Fond - a magic bar owned by magician Dominique Duvivier. “My magic has a lot of banter. I was ranting on about how the coin was in my hand and I realised they didn’t have a clue what was going on.”

Next it’s touchdown in NEW YORK. They meet one of their all time greats Harry Lorayne, the fast-talking magic legend whose bible The Magic Book sparked David Blaine’s interest in Magic. They also meet David Acer, Canada’s finest close-up magician and blag their way in to Monday Night Magic (the Big Apple’s premiere magic venue) where they perform to a sell-out crowd. Pete also gets to fulfill a personal goal by performing on the boardwalk at Coney Island. “Awesome”, he says.

On to LA, the city of stars, where our hard-working magicians cruise, eat sushi, hang out with Gary Oldman (nearly) and attend a premiere. In between they catch up with the world famous close-up magician Dean Dill, who is an expert at coin magic. They also share stories with John Gaughan, a legendary magic inventor who taught Blaine how to chop off his ear and interview the outrageous performer Max Maven, the ‘Ming the Merciless’ of mind reading. They also get to perform at the prestigious Magic Castle. “A life-long ambition”, says Ali.

Next destination are the casinos and showrooms of VEGAS where Pete and Ali reluctantly watch a bevy of showgirls perform an erotic magic show and marvel at the old ladies wheeling their oxygen tanks from slot machine to slot machine. They pop in to the Rio Hotel to watch Penn & Teller weave their magic skills and chat to the Emo Philips of comedy magic Mac King and the pagan persona that is Jeff McBride, a magician whose act embraces mine, masks and martial arts. Fuelled by the Vegas vibe, our ‘swingers’ hit the bamboo lounges to perform some close-up magic of their own.

Another day. Another continent. BUENOS AIRES, home to the world’s only professional one-handed magician, Rene Levand and some nice young ladies who give Pete and Ali some tango lessons “they showed us some of their moves, we showed them some of ours,” says Ali. They also talk to Henry Evans, who is famous in Argentina for his card tricks and sleight of hand. Revealing some sleight of hand of their own, our magic mavericks perform on the streets and at the Bazar de magia and get to eat a lot of cow.