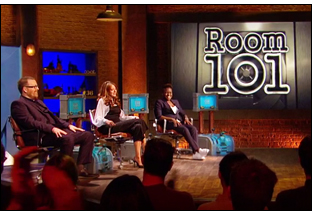 Room 101, introduced in the chilling climax of George Orwell’s classic novel, is the torture chamber in Big Brother’s Ministry of Love, in which the subject is forced to face his or her own worst nightmare, fear or phobia with the object of breaking down their resistance.

For the working magician, Room 1001 might well contain a Smash & Stab with tragically failed electronics or a lower-tech but still damaging performer-brain-fart; a Buzz Saw gone gut-wrenchingly wrong; a moribund Monday Night Examination crowd; or for my part: led kicking and squealing like a stuck pig from, coincidentally, Animal Farm, to a seat at Mindfreak.

Imagine a populist media version of the concept; started in 1994 on the fledgling Radio 5, with host Nick Hancock, the concept of guests’ admitting to their greatest fears and phobias was diluted to things they merely disliked or found annoying. I guess we should have seen the early signs when Caroline Quentin, and later Jim Davidson, both nominated Paul Daniels as the item to go along the conveyor belt to oblivion.

To bring things up to date, an acquaintance working on the production team tipped me off a few weeks back that the upcoming TV episode of Room 101, whose live recording was already ‘in the can’, would be one I’d not want to miss. As a spoiler alert she told me that Frankie Boyle was a guest. Now in my worldview, two of the UK’s top 3 comics are Frankie Boyle, and the programme’s host Frank Skinner (and no, I’m no Frankophile: for the record the top slot has long been held by Stewart Lee). And, my informant briefed me, Mr Boyle was very much on form, with much cutting in the edit suite to make the show broadcastable on a mainstream terrestrial channel.

So it was with great anticipation I sat down to watch as this dream-team episode aired; an anticipation boosted by the appearance of another of the guests: Diane Morgan, who as the deluded investigative journo Philomena Cunk graces Charlie Brooker’s peerless slice of rant-TV Weekly Wipe - always a no-miss chez Gill.

Turns out that in real life Ms Morgan is no dimwit; she carries a level of acerbity, laced with a generous helping of cynicism, that makes Frankie Boyle look a chattering class liberal. And, readers, imagine my aghast countenance when she opened the batting with the first object for deposit in the room of doom: ‘Magicians’. Note how she even knew to personalise it: not mere ‘Magic’ but the perpetrators themselves: ‘Magicians’. The fact that this drew a round of applause of agreement from the studio audience boded ill.

In the way the fight-or-flight instinct kicks in, I immediately began to amass the case for the defence in my mind; she would doubtless be parroting the tired clichés of the 1950’s top hat and tails, boxes, tubes and spangly dressed assistants. I would smile wryly to show how I could take a joke with the best of them, reassuring myself and whoever was in earshot how outmoded a picture this was, a mile away from today’s table-hopping sophisticates.

But this was to underestimate the depth of the Cunk’s venom. Her summary dismissal of the species was, witheringly, “They’re quite needy people. Whenever I watch them I’m never entertained”. My frank hero, the Skinner, gently protested on our behalf: “Really? I love it”. She described with growing disgust and loathing only a gifted actress and misanthrope could summon how she was dining happily with friends in an eatery when, “...there was one who was going around the tables between courses showing card tricks. And when he finished the card trick he waited. And you realised you were expected to go, 'oh, that was good; how did you do that?' So they get more out of it than you do”.

Then the gloves truly came off: “It all starts with the parents... they give their kid a magic set for Christmas. And giving a kid a magic set is giving a starter-kit to a psychopath”. Blimey, Diane, what did that table-hopper do to you? She’s not over yet, oh no: “It’s so boring... it’s like those cups and balls.... who cares?”

Warming to her theme, she moved on to the plight of magicians’ assistants, always female in her world, bent double hidden in cramped boxes: “...when they saw them in half there’s always two of them: get over it”. Then the Frank-twin, the Boyle, who so far had looked on gently amused, pounced on the opportunity: “They often marry the girl don’t they. Which tells you all you need to know about how they view women and what they expect from them: crouched in a box for hours on end. And has a twin. Bendy. We’re all looking for bendy women”.

He takes up the cudgels: “it’s alright when it’s children.... but when it’s another guy and you’re asking where the ball’s gone. We’re both forty and you’ve hidden a ball from me”.

Now it began to dawn on me the true reason for my mischievous friend’s recommendation: not the opportunity for me to revel in fan-worship, but for her to enjoy a spot of schadenfreude.

For the record, the best the third guest, Olympian boxer Nicola Adams, could come up with was ‘losing car keys’, while Frankie Boyle did a reassuringly redemptive dismissal of Celebrity Atheists with the sublime: “...I don’t need to be told by Ricky Gervais there’s no God when Derek [Gervais’ TV sit-com] gets recommissioned for a third series.” It almost compensated for the outrageous slings and arrows. Oh, and it was ‘Richard Branson’ who made it headlong into the 101 abyss. It’s as if they were not so much in our defence as finding us the least nauseating.

Faux bluster aside: take a look at it online. Rejoice in Frank Skinner’s observation on magicians’ “up-to-something hands”; Boyle’s wonderful child heckler; and the film clip of a man’s vanish going wrong. It’s a hoot. Except for the bad taste lingering in the mouth: do they mean us?