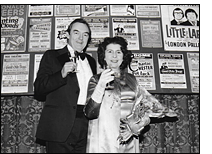 Trevor George was just three years short of a century when he passed away peacefully on Sunday, March 28th surrounded by his family, having lived an incredibly full and colourful life of MAGIC, FUN & LAUGHTER!

Trevor’s career as a magician commenced at the age of 12 and continued through his teenage years, even during the war when he served in the RAF and beyond. He is however best known for the brilliant and unique mentalism act which he and his beautiful wife Billie performed nationwide in cabaret, theatre, television and before Royalty. They picked up the challenge to present “Ship to Shore” reading the minds of people in a Torquay hotel audience from a ship out in the bay and similarly “air to ground” from a Tiger Moth plane with audience members on the ground below. This was in the 1960’s and many years prior to any sophisticated modern technology, just pure showmanship!

Trevor and Billie also founded one of the very first entertainment agencies and production companies which grew to become nationally acclaimed for the quality of artistes, summer theatre shows and pantomimes. They were passionate, ultimate professionals and also instrumental in guiding and assisting in the development of many of today’s experienced and well-known entertainers.

Trevor retired in 1996 although he continued to offer advice to up and coming performers for many years afterwards and then at the age of 95 he wrote his book “Love, Laughter and Magic”. He was a kind and extremely caring man who deeply loved his family and friends, larger than life with the most infectious humour and a genuine interest in everyone that he met along the way. He will be greatly missed.

The family have set up a just giving for the RAF where people can make donations if they wish and also leave any messages or memories of Trevor.
www.justgiving.com/FUNDRAISING/TREVORGEORGE2021