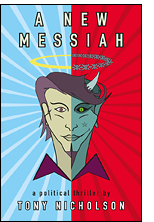 Though this is Tony Nicholson’s first novel, he is already a successful biographer and draws on background in TV production, in particular magic shows, to conjure a political thriller very much for these times.

The main protagonist, Serghei, is a Romanian immigrant and a talented magician, who convinces the public his magic is real. His meteoric rise to fame turns into adulation and hero worship. His ‘gifts’ are seized upon by dark forces for political gain.

What unfolds is a powerful story. Though delving into the murky depths of politics and complex psychology, it is an exciting, flowing read. MagicWeek readers may recognise scenarios from the world of magic, as fact blends with fiction. A clock-stopping appearance on the Jonathan Ross Show and a recognisable memory-trick or two. But these are a vehicle for the real sleight of hand to come.

You can tell that Mr Nicholson has worked in the industry. His cultural references – the BBC and Snickers to name but two – are used to serve the plot. Though set in the present, this has all the feel of a classic story with a few good twists.

The characters are well formed. The dialogue is strong and there is much humour, dark and light, delivered with a deft touch. I particularly liked the character, Maz Masters, Serghei’s manager, whose old-school bluntness serves as a sane contrast to the worlds of showbiz and politics.

All in all, this is a very accomplished and enjoyable novel, enthralling to the end.