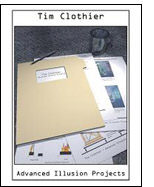 Tim had worked as an illusionist in the UK touring the country’s seaside resorts performing his illusion show. (I remember seeing him perform at the Blackpool convention.) A vacation to Las Vegas changed all that, on meeting Dirk Arthur (currently performing in his own show in Las Vegas) being suitably impressed, he was asked to design a new illusion for Dirk’s show. Tim moved to Las Vegas to serve as Dirk's Illusion Director.

Tim is now a successful Illusion designer and builder, working for Splashes Creative Services on illusions for some of the grandest shows Las Vegas has to offer.

In looking through his book the first striking thing is that it is full colour with storyboards depicting each suggested routine which gives you a feel for the prop straight away. Each illusion design features detailed scale plans of the entire structure of the prop; normally not featured in illusion books.

Detailed plans with 3D views and exploded drawings of illusion with the assistant inside. A full chapter about building mock-ups before you start. All parts of the illusion are shown and described, including information on how to build them; materials to use and recommended finishes.

The book features 8 original illusions, a particular favourite is TRAPDOOR.

TRAPDOOR : An unusual appearance for an assistant through a trapdoor.

STEAM: The appearance of the Magician from steam coming from a network of pipes.

HEADZ UP: The assistant is cut into three pieces then the box opened to show the legs, torso and head all separated.

R/C CAR VANISH: A radio controlled car vanishes from its box and reappears on the far side of the stage.

BUILDING A MOCK UP: Gives details on building a mock-up for illusion overall sizes and load space.

COMPACT DECEPTION: The Magician turns a CD player into his assistant.

THE FURNACE: A vertical Cremation illusion with a volunteer from the audience.

IRON: A unique illusion of ironing your assistant flat on an ironing board. The assistant disappears and appears in an unusual way.

ALIEN ABDUCTION: An AREA 51 routine in which an Alien vanishes and reappears in the Magician's place.

For the serious Illusionist who is looking for new and original ideas, this book is highly recommended.

Price $49.50 + $5 postage from Las Vegas. Order on line at www.illusionprojects.com