The Life and Magic of an International Magician 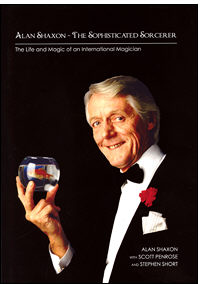 Alan Shaxon - The Sophisticated Sorcerer starts out in Alan's own words, as he takes us through an incredible career in magic, that began with a bout of measles and a few weeks off school, as he delved into his very first magic book, and went on to a very full life as a professional magician, seeing the world in the process until his retirement just a few years ago.

He looks back at those who influenced his early career from his idol and friend Robert Harbin to performers such as Edward Victor, Al Koran and David Nixon.

There's also a fascinating, in-depth, chapter on Robert Harbin that Alan had written years earlier, and anecdotes from his wife Anne, and daughter's Paula and Julia, who had all worked on stage with Alan at different times. Many friends in magic contribute too, with tales and happy memories of working alongside Alan, interspersed with lots of photos.

Alan was one of the nicest, and indeed modest, magicians that I've ever know; the first half of this book acts as a great tribute to him.

The second half is devoted to the magic that he performed in his shows over the years, including his own original creations, complete with detailed illustrations and explanations. 'Ariel Fishing', 'Confabulation', 'Harbin's Card in Whisky Bottle', 'Ultimate Nudist Deck', 'Hydrostatic Glass', and many, many more. This section of the book could be renamed 'The Stand-up Magicians Handbook' it is that good. There's a wealth of great material here.

For anyone who knew Alan then this is, of course, a really great read, but for those who didn't, it also works so well, offering a real insight into the career of a professional magician.

Steve Short and Scott Penrose, and everyone who contributed to this book, have done a wonderful job, not only in capturing the essence of one of British magic's finest ever magicians, but in allowing his magic to live forever.