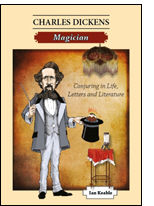 A certain playbill from 1849 announced 'The Unparalleled Necromancer RHIA RHAMA RHOOS educated cabalistically in the Orange Groves of Salamanca and the Ocean Caves of Alum Bay'. His programme contained a series of ‘Wonders’, climaxing with the production of a plum pudding from a gentleman's top hat, which emerged hot and 'reeking' as one spectator noted.

The necromancer was Charles Dickens, and the playbill - a tongue-in-cheek orientalist hotchpotch - was for domestic consumption. The performance took place in Bonchurch on the Isle of Wight, where the Dickenses were renting a house for the summer. The 'Ocean Caves of Alum Bay' were round the corner. This playbill is the primary artefact of Dickens' brief career as an amateur conjurer. His first known performance was in 1842, his last in 1849; a total of ten are documented, and there is little evidence he had any sustained interest in conjuring outside the 1840s.

It is curious that the facts of such a niche affair could be so wildly disputed. Were a combination of the most outlandish sources to be believed, Dickens would emerge as a major conjuring enthusiast over most of his life, writing articles on the subject long after he stopped performing, befriending Robert-Houdin and even assisting a performance at the Egyptian Hall. A symbiosis of error has arisen between magic researchers and Dickensian academics, the former seemingly driven by a misguided desire to grant Dickens honorary membership of the magical canon, the latter never quite interested enough to double check.

It is to Ian Keable's credit that, in combing through Dickens' life, letters and literature for every reference to conjuring, he carefully avoids revisionism. Indeed much of his book is spent chipping away at the exaggerations and distortions that have accumulated in the secondary literature. Beyond calming this storm in a teacup, though, Keable’s research gradually fleshes out a picture of Dickens the conjuror. It is of course a snapshot, but it catches a recognisable expression.

In the oeuvre of a novelist famous for his numerous, deft characterisations, there is only one magician. Sweet William, from The Old Curiosity Shop, was a street conjurer 'who had rather deranged the natural expression of his countenance by putting small leaden lozenges into his eyes and bringing them out at his mouth'. This brief, vaguely condescending mention, along with a handful of references to street and fairground scams, form a tiny strand of Dickensian populism. But they give Keable a starting point to expand on the context of Dickens' conjuring, a period in which the growth of conjuring in theatres was underway but well before its peak, and in which conjuring was still more likely to be seen on the street than in middle class drawing rooms.

Dickens' intersection with this context is instructive. He found, of course, no affinity with Sweet William, but it would also be wrong to assume that as an amateur conjurer he simply rode the Victorian wave of domestic conjuring. That development was late-Victorian, propelled by Hoffmann's milestone publications beginning in the 1870s, and postdating Dickens. No conjuring books are listed in the catalogue of Dickens' library at Gad's Hill. It would seem, rather, that he was inspired by theatre performances, in particular by the German Ludwig Döbler, and accordingly inherited an earlier style. The Robert-Houdinian synthesis of sleight of hand, psychology and mechanism would have been beyond Dickens' powers, which were largely dependent on commercially available apparatus.

The image of Dickens the conjuror that emerges, then, is not one of a devoted student of sleight-of-hand parlour routines; it is at once less dedicated and less conventional. Conjuring was even more eccentric a hobby than it later became. It was, in Dickens, a mark of obsessional enthusiasm and a love of role-playing. He seemed to want to steal his share of glory directly from the stage, describing one of his tricks as 'better than the Northern Wizard [Anderson] and as good as Doebler'. Hence, for a brief spell, he brought to conjuring the same extravagant ambition that he brought to every pursuit; more specifically, conjuring was one outlet - along with acting, his late public readings, his famous mimicry and his role as a public figure - of his need to perform and be met by an audience.

How this need to perform - the vital connection with a reactive audience in front of whom you can define or escape yourself - may have informed Dickens' fiction is one of the alluring questions distantly glimpsed in this book. More in evidence is the role of Dickens' conjuring in his immediate circle. It was a means of being not only the centre of attention in gatherings, but the centre of gravity in the home. It embellished Dickens' role as domestic master of ceremonies, each 'Wonder' on his playbill functioning as a rambunctious, festive triumph of family merriment.

This role, of course, derived from the Dickensian glorification of hearth and home, but even the conjuring manages to convey the ambiguity of this vision. At one point Keable suggests magic appealed to Dickens partly as a theatre of power, conferring knowledge and hence authority on the performer. Dickens' high praise for his own conjuring suggests something of the domineering worthiness that overshadowed his family relationships. The most enduring image of the book is of the steaming plum pudding being lifted from the top hat and apportioned among the audience of children and adults, the hat now a gushing cornucopia of domestic pride and familial cohesion, and at the heart of the scene, towering over it, the patriarch, the provider, 'the Inimitable'.

Frequently, though, Keable's research tells us considerably more about conjuring of the period than Dickens. (Keable seems apprehensive of the split in his audience, assuming those interested in magic will be intently preoccupied by the minutiae, those interested in Dickens only moderately.) Rhia Rhama Rhoos' playbill, for instance, is not only a document of Dickens' repertoire. It suggests how conjuring was appreciated by a spectator of the 1840s, and not just any spectator - an avid, critical one, with a taste for theatrics and a hyperactive sense of humour. The playbill is full of phony procedures: 'A shilling being lent to the Necromancer by any gentleman of not less than twelve months, or more than a hundred years, of age [...]'. What could, in the playbills of contemporary conjurers, be interpreted as earnest egotism, in Dickens' version becomes self-conscious farce. Presumably the intention wasn't purely satirical; presumably, Dickens was capitalising on an irony implicit in the spectacle of conjuring itself.

Of the miscellaneous insights Dickens' life provides into conjuring history, though, one stands out. In 1854, he saw Alfred de Caston. He was stunned by his performance, and describes a series of bold mind reading effects, apparently free of all apparatus. Keable shows how, in de Caston's use of writing slates, he pioneered techniques used by Spiritualists and had an unprecedented subtlety of handling. Beyond any method, though, it is de Caston's stylistic innovation that seems to demand an adjustment in magic's genealogy. His manner was at once imbued with Spiritualism's paranormal preoccupations and free of its formal constraints (unlike say the Davenport brothers who relied on darkness); and whilst drawing on mesmerism, his performance was framed squarely as conjuring. Dickens' description, then, suggests a balance of supernatural and secular implications and a stark aesthetic immediately reminiscent of some present-day mentalism, fully formed a mere six years after the Fox sisters first reported rappings in their house in Hydesville, precipitating the birth of Spiritualism.