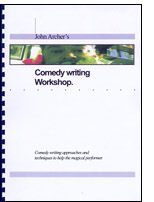 "I passionately believe that for any performer to reach his/her full potential they must strive to be original. Unfortunately in the field of comedy, it is too easy to use old material, or worse still, new material that belongs to other people. The truth is that it is not difficult to be original if you are willing to put in a little time and effort.

For many magicians who use comedy, the formulation of an 'act' involves the learning and rehearsing of various tricks, and then acquiring the right jokes to fit in between. Imagine how much more effective that act could be if the jokes were written to suit the situation and the performer. Imagine how much more confident you would feel if you know that the audience is not likely to have heard your material before."

I'm sure that there are plenty of comedy magicians who have never read a single word on the construction or performance of comedy magic (come to think of it, I know that there are!). John Archer, the star of Sky's Undercover Magic, has written for a number of TV shows, as well as for his own act. If you've been performing comedy magic for years, or are just starting out, Comedy Writing Workshop will really help you focus your own comedic talent, to create your own material. Headings include: The process of writing a joke, Brainstorming, The Comedy Premise, The Surreal Joke, The Surprise Joke, The Power of 3, The Rug Pull and more...

Available from www.tvmagic.co.uk (from the 'Magicians Only' section)