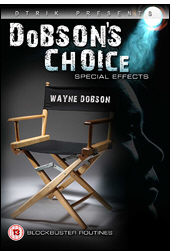 To make tricks more complex is something that all of us can do; to simplify them, whilst not detracting from the effect, is a lot harder. But it’s something that Wayne Dobson is now specialising in. And this, his latest book, continues this paring down to perfection.

The book contains 13 tricks: okay many of them are with cards - but all brilliantly direct. For close-up there is telling a spectator how many cards they have cut to, with a kicker finish; a really subtle version of A Card at Any Number where the wording convinces those watching (when he gives it, Wayne’s patter is always spot on) ; and an easier way of doing Vernon’s The Trick that Cannot be Explained. Dobson also has a couple of contributions from friends: a continuous Do As I Do from Pat Page (I’ve seen Pat perform this and, as you would expect from Mr Page - who incidentally this book is dedicated to - it’s wonderful) and another sort of Do As I Do from Steve Beam (equally good).

For those of a mental persuasion there are two very strong prediction effects with your business cards – one where you wager £20 on which card will be chosen out of seven; and another where you predict the placement of a wallet, keys and phone (Stephen Tucker provides a variation on this but I prefer Wayne’s original). For more stagey work there is a two bottle prediction with a surprise dénouement.

There are a couple of stand-up tricks – a card stab with a nail and silk in cigarette packet – that have lovely touches applicable to other tricks, even if you wouldn’t want to do the exact effect in these ‘pc’ times.

For me, though, the ‘pièce de résistance’ are two effects direct from Wayne’s cabaret act. A great re-working on the Invisible Deck (incorporating a superb way of doing the magician’s force), where the chosen card is found folded in a purse; and his five card repeat. The latter is one of the best opening tricks I have seen from any magician: when Wayne did it, fast paced and with a drum beat highlighting his words and actions, it was a joy to watch. And here you have not only the exact method used but also the patter.

On first looking, I felt the book (it’s very nicely produced but is an A5-sized stapled 36 page paperback) was over-priced for just 13 tricks. But this is real quality material, not a bum trick in there. And one final thought: I have my own opener now which suits my style - but twenty years ago I would have paid twenty pounds without hesitation to have Wayne’s.

Available from: www.waynedobson.co.uk or your favourite magic dealer