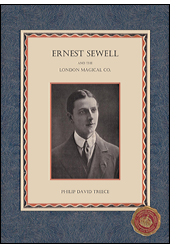 Quite why I wasn’t given a Sewell Magic Set as a child I am unclear. They were still manufactured in the 1970s and it would seem an obvious gift for a young boy interested in magic. By this time I am sure that most purchasers would have been unaware that Sewell himself was ever a magician. The portrait on the front – Sewell was the first to put a photographic reproduction, there were four different ones over the period from the 1920s to the 1950s – gives the impression of an avuncular, bespectacled bank manager rather than a performer. But in fact Sewell had had a good and variable career prior to concentrating on the business of manufacturing.

Ernest Sewell was born in 1886, a good year for show business with music halls at their peak. Sewell, though, was never quite of that class. Although he toured Australia with Harry Lauder, a famous Scottish comedian and singer, he specialised in the less raucous world of concert parties in the summer and private engagements in the winter. In this environment you needed to be versatile. So Sewell didn’t just do magic, but also ventriloquism and singing; he partook in sketches and performed a living marionette act. Later, when he started publishing books during the 1st World War, he wrote Marionettes in the Making and Manipulation.

Despite this new business venture – by 1919 he had published six books under the name of the London Magical Co. – he continued to perform, having his greatest success with a variety troop known as the Moonstones. They were featured on radio in 1924 making Sewell to be the first magician to feature both on radio (even if in a non-magical role) and television; the latter in a show called Cabaret in 1938.

Although he had produced magic sets prior to the late 1920s, it was around 1928-29 that the first Sewell Conjuring Sets came out. Over the course of his lifetime there were four series (with quite a few sets in each series), with various changes made between each. From the outset they were a success with an early promotional deal made with a cereal company. By the mid 1930s he employed seventy people at his factory and had branched out into other toys, his most popular being TiddlyTennis. By now he was selling exclusively to the toy business rather than magic shops and dealers.

Despite a slight blip during the 2nd World War, the business continued to flourish right up to his death in 1964. The final series of sets in his lifetime were produced in the 1950s, where the quality of packaging and contents had declined. The fact that the booklet enclosed with the set had been rebranded from The Golden Book of Magic to the Silver Book perhaps reflected that.

Philip David Treece has done an excellent job of charting the life and career of Sewell and itemising all his numerous magic sets. The large 80 page pamphlet is chockfull of photos conjuring up a period long gone, although doubtless still remembered fondly by many older magicians. Unfortunately there is very little information (through no fault of Treece, there is just nothing much in print) on the magic that Sewell himself did or his style of performing. His legacy is rather in his magic sets which are still collected and treasured today.