The Essence, by Tony Griffith
Overview by Al Smith 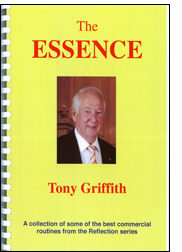 In 2007 in the introduction to Reflections, Tony wrote that it was the first book in a proposed series of three. Come 2008 and the second book appeared, then in 2009 came the third. And then just to confound the issue, in 2010 came a fourth book, Final Reflections.


Four books. A heck of a lot of material, all workable, performance-tested routines. Not everything for everybody, but certainly a pocketful each. At least.


As well as lecturing to magic societies, over the years Tony also organised a series of “At Homes”. These were full day events at his home, attendees being restricted to about a dozen or so. Bigger groups would have benefited from the sessions but there’s only so much space in Tony’s country mansion.

After several successful years, Tony decided it was time to draw the curtain on the literally “at home” events and take the show on the road. And this book, which formed the bulk of the material featured in the events was assembled to accompany him.

And here we are. For many years lecture notes were just that—notes. If you weren’t at the lecture it was often difficult to decode the notes, assuming you managed to acquire a set. But lecture notes appearing over the last 20 years or so have been fairly comprehensive. Attending a lecture is usually no longer essential to learning the material.

So it is with The Essence.

The book is well written and well set out. As I mentioned in a review of Ultimate Reflections, on his own admission, Tony’s strength is not his ability at invention. But he does have a knack for routining. And there’s plenty of that on display here.

Although this is a collection of material culled from the Reflections series, a fair bit of it has been modified and updated; so it’s not at all a straightforward lift. Anyone who has the full Reflections collection will not need these tweaks, but not everyone has the full set, or even a single volume. Now’s the chance to put that right.

The material runs the gamut of close-up, stand-up, parlour and stage. Nothing requires anything more than smooth handling. Once again on his own admission Tony Griffith is not really a sleight of hand magician; most of us aren’t. So this could be what we’re looking for.

Tony is also on record as describing himself “as more of a thinker than an inventor of magical effects, finding it easier to link and routine ideas.” For me that is no mean skill. And on offer here are performance-ready routines to warm the most jaded soul. Familiar themes clothed in experience. The Diary Trick, Ten Card Poker Deal, Rainbow Deck, a practical presentation of the Grey Elephant In Denmark. By “practical” I mean it’s easy for the spectators to follow and be a part of. There’s also an interesting colour variation, too. The elephant need not always be grey.


For those who fancy a sideways look at the Sam The Bellhop type of thing , The Spiv Revisited might be just the job.


In an age where the memorised deck seems to have ousted every other practical system (it hasn’t really) it’s nice to see The Stebbin Quintet a section devoted to (guess) Si Stebbins.


Tony also includes comments on magic in general, presentation and whatnot and these are every bit as insightful and valuable as the tricks.
But this is only nibbling at the surface. As I say, there’s so much that anyone remotely interested in magic will find something of interest.