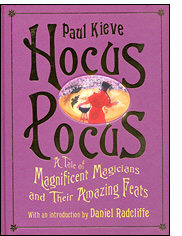 "Imagine the most amazing, most mysterious, most masterful magicians in history coming back to life and putting on the a magic show to end all magic shows — just for you!

Hocus Pocus tells the story of a young magician. Ever since he was given a magic set at the age of ten, he has been buying magic books, props and posters and honing his skills as a magician. He keeps all his magical paraphernalia in his house in Hackney, right around the corner from the magnificent Hackney Empire, a venue played at by all the great illusionists of the golden era of magic, some hundred years ago.

One day, he is on the phone to his friend, sitting in his ‘Poster Room’, and chatting about how well his magic show from the night before went, when he gets a strange sensation . . . Suddenly, the huge figure of Alexander steps out of the poster and starts telling him off for getting too big for his boots! Alexander and the other brilliant magicians in the posters are going to show him what magic is really about! Over the course of a year in the magicians own home, the magicians come to life from their posters and perform their acts, exactly as they were done on stage at The Hackney Empire almost a century before."

Paul Kieve's Hocus Pocus somehow manages to combine true stories and accounts of past masters of magic with tales of pure fantasy as magicians vividly come to life, with actual magic tricks that you can learn and perform to your friends, with tips on showmanship and presentation - together with an underlying quest that seeks to discover what makes magic magic! Phew... It sounds a little complicated, and in a way it is, but perhaps that's what makes this book (aimed at 9-14 year olds I would imagine), such fun. One minute you're reading a story, the next a history book, and the very next a book of magic tricks.

It has the look and feel of a real magic book too, with delightful pen and ink illustrations by Peter Bailey, and descriptions of over 30 magic tricks. At the back of the book there's an envelope containing postcards featuring a collection of magic poster reproductions and clever optical illusions.

Moments after opening the cover you'll find yourself being transported to a world of magic. To be published on Monday, October 22nd, I am sure that Hocus Pocus will appear, as if by magic, in many a Christmas Stocking this year. Highly recommended.