Look, No Hands
by Wayne Dobson
Reviewed by Liam Montier 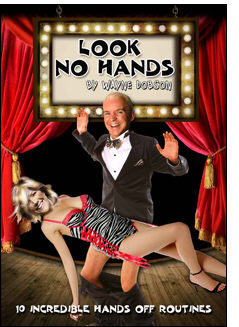 “Look No Hands” is a new collection of 10 routines from the ever astonishing Wayne Dobson, and the theme, as you may have guessed, is that all of the tricks have been structured to work without the need for the magician to touch anything.

Although Wayne mentions that he came around to this style of routining through necessity (due to his M.S.) he goes on to mention how much stronger his routines became as a direct result, and encourages the reader to explore this concept. While some of the routines would take masterful audience management to keep completely hands off (which Wayne has in spades), there is much to learn from adapting as much of this approach as you would be comfortable with.

Out of the ten effects, some have been published before, but Wayne includes enough new ideas and presentational twists to make even avid collectors of his work find value in this new booklet, and some of my personal favourites are mentioned below.

“Out of my Hands” is an interesting variation on Paul Curry’s classic ‘Out of This World’ which features a great ‘build-up’ construction, starting with the performer being able to identify some of the cards colours, and then two spectators simultaneously separating the deck in classic fashion, “The Sh*t Spell” is an extremely funny version of the classic ‘spelling’ trick that, while it won’t be for everyone, for the right performer is going to be a killer.

“Invisible” is another ideal trick that I can see working its way into acts left right and centre, where a card chosen from the ‘invisible’ deck turns out to be genuinely the only card in a prediction envelope in full view.

In my opinion, those tricks alone make this a worthwhile purchase, but then there is so much more in the booklet. New versions of Wayne’s classic ‘Tossed Out Deck’ routine and ‘Echo’ are, well, even more classic than before, and that just covers half of the material included in this collection.

Well written by Stephen Tucker, nicely produced (there are no photos, but none of the routines need them to be honest) and would be an entertaining read for the stories and jokes alone. The fact that this booklet also contains the repertoire of one of the most entertaining performers magic has ever produced is a rather splendid bonus.