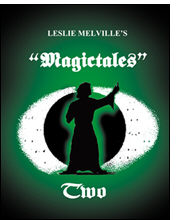 For countless generations, man has told stories not just to entertain or pass the time but also to inspire, teach and pass on information to future generations. The fables of Aesop and the parables of Jesus resonate with us because they relate directly to the human condition.

In olden times good storytellers were held in high regard. In old Ireland, the Seanachaidh, (Gaelic for storyteller), regaled all with tales of ancient lore, brave deeds and great warriors.

Sadly with the advent of movies, radio and TV, this great tradition has almost died out.

Fortunately we in the magic world have in our midst some first class storytellers who mix magic with storytelling. Ed Solomon, Robert Neale, Eugene Burger and ...

Leslie now lives in Blackpool, England but his professional career has taken him all over and in many different guises, or disguises. His CV covers work as entertainments director, cruise ship performer, magician, children’s entertainer, MC, bizarre magick, storyteller and ghost walk host.

I don’t know how good you are at telling stories but Leslie’s book will tick the other two boxes providing you with a wealth of great stories with a magical twist.

Unless you are promoting yourself as a storyteller, I don’t recommend including more than one or two in a regular magic performance. If you are a storyteller but don’t mention that you are a magician, including one or two of Leslie’s (magical) presentations will have a powerful effect.

The book is full of solid, practical routines, all with the Melville touch. One beef that Leslie has, and I am in full agreement with him, is with the modern presentation of illusions. Box gets wheeled out, it does what it does and then gets wheeled off, generally taking less than three minutes. Puzzling eye candy with no emotional hook. Leslie offers his thoughts and includes a delightful presentation for the Origami Box.

It is difficult to pick out the ‘plums’ of the book because there is so much usable material. So I will mention a few. The one effect that will probably find its way into more professional repertoires is ‘Another ...then Another...and Another’, Leslie’s interpretation of Roy Scott’s Repeat Banknote Production. I have seen Leslie perform this and it has a strong effect on laymen.

I draw your attention to Crandall’s Six Card Repeat, originally published in Tarbell 6 but largely overlooked. Years back, Goodliffe, editor of Abracadabra magazine pointed out that the effect was killed in Tarbell because the good doctor (Tarbell) didn’t have a sense of humour. Leslie gives a full presentation and has added a strong ending.

I could go on mentioning many of the other strong presentations, so I will just tell you that some are for close-up and some for stage or platform. Some are spooky and unsettling, while others are heartwarming and uplifting. None require technical sleight-of-hand skills.

One caveat. Some of the seance type routines can be deeply unsettling and are best suited to an experienced performer.

The appendix at the back has lots of artwork for you to photocopy and use for your presentations.

Between the twenty-four routines there are essays on introducing yourself as a storyteller, structure, and themed shows for schools.

216 pages, letter size paper (almost A4), perfect bound. Illustrated by Bill Thompson and Barrington Powell with a foreword by Jeff McBride. $39.95 Published by and full details at www.leapinglizardsmagic.com/csspages/css_magictales_two.htm

Highly recommended and I also recommend you invest in the first book Magictales as well, if you don’t already have it.