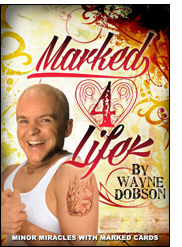 I have just read in the latest MAGIC magazine a trick that requires the following moves: the Ascanio Spread, Jordan Count, Elmsley Count, Three Second Wonder, Double Lift, Slip Cuts and Secret Add-on. Needless to say there are a myriad of magical occurrences that take place during the routine. But, however well executed, as far as the lay audience are concerned what happened is highly unlikely to be remembered with any clarity. And, as for describing the effect in a few words, forget it.

Compare that to demonstrating you’ve memorised a whole deck in an instant; or spelling down to a selected card in a deck; or both you and the spectator find the same reversed card in two different decks; or the spectator mentally selects both a card and a number in the deck where it is to appear; and so I could continue with the other four tricks that appear in this latest booklet by Wayne Dobson.

Wayne has an instinct, which few magicians have, for creating effects that really mean something to an audience. For him the method is immaterial so long as it does the business. There will be some purists who might be disappointed because – and I’m not giving anything away here as the clue is in the title – seven out of the eight tricks require a marked deck (and one an Invisible Deck as well) of some sort. Little detail is given of how to create your own marked deck; that is up to each individual to decide what works best for them.

The one trick that doesn’t use a marked deck – instead it requires eight blank faced cards which need some doctoring – is perhaps the pick of the bunch: a lie detector routine with a real kicker. I could easily see someone getting considerable mileage out of this by adapting it for a stage trick.

The small booklet of A5 size is 20 pages long with no illustrations: but then no illustrations are required. As long as you know how to cut and deal cards then it is 'game on' for all the tricks in this book. You might be tempted to throw in a few Dynamo moves but, as Nick Einhorn stresses in his insightful foreword, “keep these routines 'Hand’s Off' and just see how much more unfathomable they become.”

All in all yet another winner from Wayne.