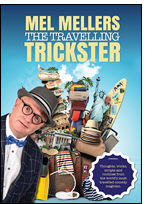 Mel Mellers is someone who has done the rounds and rightly earned his place as one of the UK’s best comedy magic entertainers. Like others with similar skill and experience, Mel focuses on the lucrative cruise ship market; one of the few venues left where you’re guaranteed an attentive audience in a theatre style venue (albeit given the age of many cruisers they might not be fully awake during the show). And that makes for routines that have personality, pack-a-punch and pack light!

This well produced full-colour soft-back book is crammed with tips, routines and advice from a working professional. A huge amount of quality material is included here. Some routines, which no doubt appear simple in effect and method, must surely be the result of countless performances to hone them into shape. And that hard-work is almost glossed over in the laid back and simple flowing style in which the material is presented for the reader. I felt as if Mel was giving too much away and perhaps not giving enough prestige to some of these pieces. Guess that is also a great scoop for the purchaser!

Reading it with my performer's hat on, it was the ‘bits of business’ that were, in my opinion, really worth their weight in gold. And these are littered throughout the book. Many may pass them by, but to the savvy and experienced performer you’ll read a sentence for a gag or bit of business that might give birth to a whole routine inspired by Mel’s thinking.

I’m not a fan of routine books that tip the performers patter and gags, warts and all. It usually means there’ll be more clones imitating the originator (usually though lack of experience and the mistaken thought that if it works for Mel then it’ll work for you). However, that aside, the keen magician who studies why the routines and scripts work so well for Mel will learn how to structure their own magic to suit their own performance.

This book is great value for the working pro, or those who aspire to be paid to perform. It deals with stage magic in the main, and shows how through study, contemplation and experience, the simplest bit of magic can be made into something which is engaging and interesting for modern audiences.

But I would urge the reader to study each routine, essay and script closely and not imitate the scripts word-for-word. By understanding the rhythm of Mel’s magic, you can begin to make his routines work for you. There’s only one Mel Mellers and behind each piece is years of practice, vast experience and a deep understanding of magic.

A few years back I was involved with Geoffrey Durham’s Professional Secrets book. Mel’s new book is of similar ilk; a lifetime of wisdom captured in a book. Learn the lessons, apply it to your magic and you’ll be well rewarded for the investment of buying this book.