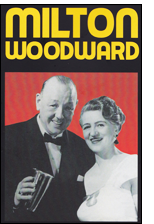 Milton Woodward may well be the most significant magician you have never heard of.

Although he never headlined with his own show, Woodward supported many of the top stars of his day. He was also mentor to the late David Budd, who had been writing this book on him for many years. Whenever I asked David about his progress, he would say “I’ve written another paragraph!”

Legendary Abracadabra editor Donald Bevan inherited, via David’s daughter Janet, a pile of David’s notes, and has done a wonderful job in collating them. David had a distinctive, quirky style which Donald has resisted the temptation to modify, giving the impression that David is chatting to the reader. Indeed, the book is peppered with fascinating asides, digressions and ‘notes from the author’. For example, one of Woodward’s first encounters with magic was when, as a young boy, he bumped into David Devant in the street when he was showing off his coin-producing wand.

The writer deals simply but sensitively with the decline into alcoholism and debt of Woodward’s wife, Stella, and the break-up of their marriage; daughters Betty and Sheila choosing to stay with their father and Betty joining him on stage as a ’page boy’ assistant. Indeed, acknowledging the influence of Cardini, she would emulate Swan by opening the act with the announcement “Paging Mr Woodward.”

Woodward teamed up with assistant Millicent Cooper, a proficient singer and dancer, who joined his show in 1934 – a relationship which would last for thirty years. Eventually, Millicent produced and directed the act. By all accounts, she was a feisty character who controlled the business side of things and instilled fear into stage managers, even causing a strike on one occasion. As David remarks: “On stage she was a graceful, good-looking young woman, but often back-stage I saw her wading into stage-hands who had not pleased her, with language which would have made the toughest navvy shudder.” She kept Milton in check, selling his doves and rabbits when she felt they were not being treated properly . . . and her purple hair certainly raised eyebrows in Leamington Spa in the 1930s.

Although Millicent claimed to make 18 costume changes in 9 minutes, press reviews record 18 in 14 minutes; including three during the curtain calls alone. Whatever the case, this brought her into conflict with Lewis Davenport, who protested that she had stolen the idea behind his colour-changing waistcoats, used to punctuate his tricks.

The book contains some priceless anecdotes – the occasion when Millicent almost rolled off a steeply raked stage in a cabinet . . . police being involved when an audience member claimed that a ring of inferior quality had been returned to her at the end of a trick . . . Levante plunging manacled into a river to find himself up to his knees in muddy water. The ring incident concerned a routine in which three borrowed rings were hammered out of shape to fit into the muzzle of a revolver and then fired into a suspended nest of boxes. The rings were ultimately returned unharmed, along with gifts of chocolates and cigarettes.

Another amusing anecdote concerns a performance on the British Ring gala show at Buxton Opera House in 1937. Woodward’s swirling cloak knocked over a stack of goldfish bowls, complete with water and fish. The audience’s alarm was increased when Millicent not only ignored the stranded goldfish but actually stood on them. They were, of course, slices of carrot.

Ironically, safety curtains are capable of causing serious damage owing to the heavy metal used. The career of Ali Bey was curtailed when he had an accident involving such a curtain, and Millicent was injured when she was hit on the shoulder by one as it descended.

We learn that Milton and Millicent always stayed in the best hotels rather than theatrical ’digs’, and so did not mix much with their peers. As David remarks: “Such accommodation was not to ‘show off’, but if you claim to be a ‘World Master of Magic’ you have an image to live up to.”

During the first part of his career, Woodward ended his act with a Garden of Flowers finale, the whole stage full of colourful blooms and parasols. It took him all the time he had between performances to re-set. Millicent appeared via a Doll’s House illusion, a statuette was transformed into a living lady and a wartime land girl waving a spade appeared to represent the Queen of Spades! This floral presentation inspired David Budd’s own act, Magic in Lavender, devised with his wife Rita. It took them all over the UK to magic clubs and dinners, banquets and conventions, plus occasional journeys overseas.

In 1950, Milton and Millie introduced the more compact Woodward’s Wonder Bar, featuring a range of liquid effects built around the ‘Any Drink Called For’ concept. The innovation proved popular with audiences – apart from teetotallers such as Mr George Payne who objected to its being presented as family entertainment and threatened to stop the act. This no doubt provided valuable publicity for Woodward and Company.

Born on 2nd April 1900, Milton Woodward died on 25th February 1964 at the age of 63, while in office as President of the British Ring of the International Brotherhood of Magicians.

David Budd’s book is a fitting memorial, and a significant contribution to magic history. It has been attractively set out by John Hawkins, who is responsible for the look of the Key Ring and Magic Circular magazines, and books such as the celebration of Jon Gresham by Eddie Dawes and Jon Marshall.