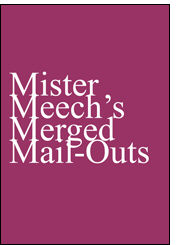 Oliver Meech has got plenty of chutzpah. Over the course of a year he produced a bi-monthly newsletter which anybody could get for nothing by subscribing from his website. He has now reproduced all 26 issues as an e-book which he is selling for £10.


Admittedly he has made a few changes - he’s produced a thorough index and thrown in a bonus trick; but possibly not quite enough to justify the transition from free to fee. For instance littered throughout are constant references to his well-received book The Plot Thickens: fair enough in a giveaway but it’s a little annoying, when you’ve paid good money for what you are reading, to be constantly told (and taking up valuable pages in so doing) how brilliant another of the author’s publications is.


Having got my gripe out of the way, Oliver Meech has clearly a very clever mind that is constantly on the lookout for original plots and effects: and 13 of these are sprinkled throughout this e-book. Many of them involve cards but cards certainly used in unusual ways: razor blades inserted inside them, concealing them inside a party blower, changing real flowers into flowers imprinted on them. Other tricks involve surprising your friends with a predicted pizza delivery, bad passport photographs transforming into good ones and an impromptu Malini inspired street stunt. The descriptions are minimalistic - so they assume a certain level of magical knowledge and skill. But, as they say, find one trick that you will use and your investment has paid off.


The rest of the newsletters involve ideas to improve your magic, links to unusual web sites that will get your creative juices flowing (an advantage of e-books means you can click straight through to them) and an insight into Oliver’s own thoughts on performing as he makes the transition from amateur to professional (including plugs to see him perform in past gigs, something else you might have thought would have been prudently edited out). One of his steps on this journey was to purchase Stand-Up, A Professional Guide to Comedy Magic which I’m delighted to say he enjoyed (annoying, isn’t it, for the reviewer to use up space to plug his own book!).


In summary, if an e-book of quirky close-up tricks and inspirational ideas to springboard off are your thing, then this could well be for you: just be aware that you are buying with it some of yesterday’s news.